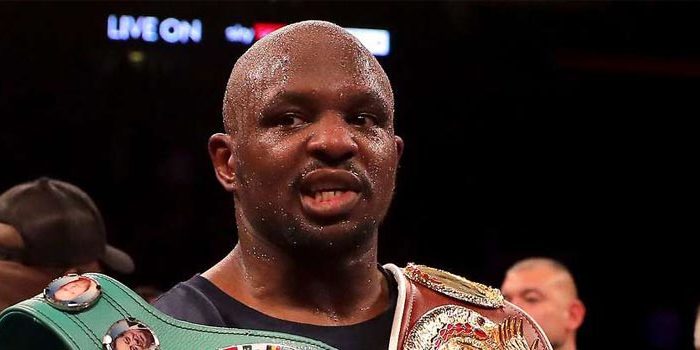 Heavyweight contender Dillian Whyte has continued his verbal assault on Tyson Fury. The World Boxing Council recently suggested the idea of a final eliminator between Whyte and Fury.

Fury claims that he will take part in the eliminator – but only if the WBC sanctions the fight for their “Diamond title.”

Whyte does not believe Fury and does not expect the two of them to fight any time soon.

He believes Fury is attempting to run out the WBC’s clock, to bring himself closer to a 2020 rematch with WBC world champion Deontay Wilder.

“Since when did he care about belts? I thought he was the self-styled lineal champion? Forget what he has said this week, it’s all rubbish. I wasn’t born yesterday. It is a delaying tactic by Fury. He wants to fight Deontay Wilder again at the end of the day, and if all goes to their plan that will happen early next year. But that’s not my plan,” Whyte told Talk Sport.

“I’ve been WBC number one for over 560 days and chasing that protected, coward Wilder who has chosen voluntarily to fight Luis Ortiz and Fury for less money combined than he would’ve earned fighting me. The only reason he did that is because he knew they were easier fights. Enough’s enough. Forget all that Fury noise, I want my shot at the protected champion.”

Wilder will face mandatory challenger Dominic Breazeale on Saturday night at Barclays Center in Brooklyn. And Fury is back on June 15, when he takes on Tom Schwarz at the MGM Grand in Las Vegas.

The current scenario, says Whyte, is proof that Fury is not looking to take part in a dangerous fight at the moment.

“Me and Fury would be a massive fight in the UK, everyone who understands boxing knows that. But he always contradicts himself. If you listen to what he says from one interview to the next it’s something different every single time – he talks absolute nonsense. If he’s the best heavyweight on the planet then why is he fighting Tom Schwarz? He’s ranked number 53 in the world. 53! If you’re a real champion and a real fighting man, you don’t do that. He turned down an ordered rematch with Deontay Wilder to fight Schwarz. That’s not the actions of a confident, fighting man,” Whyte said.