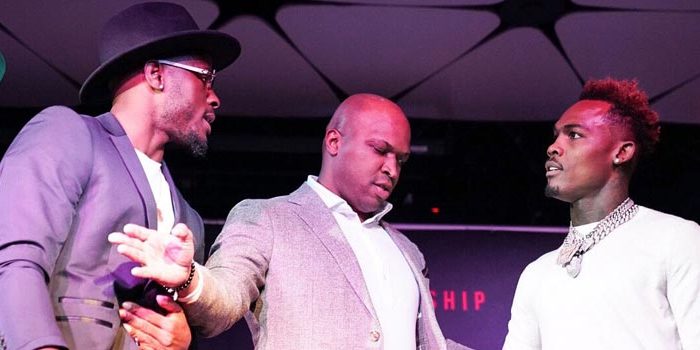 From the moment Tony Harrison and Jermell Charlo met face-to-face Wednesday at the Conga Room in downtown Los Angeles, there were fireworks.

Instead of sitting down, he opted to wait for Harrison to make his entrance. As soon as Harrison ascended to the stage, he walked right up to Charlo and the two said things to each other under their breath, their foreheads coming together.

Jermell Charlo and Tony Harrison meet face to face for the furst time since Harrison’s controversial victory over Charlo in December #HarrisonCharlo pic.twitter.com/kti47mJYgG

The first fight in December was touted more for kicking off the new PBC deal with FOX than for the competitiveness of their encounter. Charlo (31-1, 15 KOs), then the WBC super welterweight champion, was a long-odds favorite to beat Harrison, who was challenging for a title the second time after coming up short against Jarrett Hurd a year and a half earlier.

Charlo was supposed to take care of Harrison and setup a mega clash with Hurd sometime in 2019. Instead, the 28-year-old boxer-puncher found himself on the wrong end of a close unanimous decision. Many were shocked by the result and the two will do it again on a Sunday evening in a fight that promises fireworks.

Wednesday marked the first time the two had seen each other since that fight. The distaste for each other was palpable and translated into each guy’s opening comments.

“I’m coming into this new fight with a whole different mindset and a much different gameplan,” Charlo said on the dais. “One thing y’all know I do well is destroy those that think they can run their mouth like [Harrison] is doing. … I’m a man outside of boxing. I don’t know how y’all take disrespect, but I don’t take disrespect well.”

At this point, Harrison told Charlo from his seat to shut up.

“You know personally to yourself that you didn’t do enough to win that fight,” Charlo added.

“This guy right here is a clown,” said Harrison (28-2, 21 KOs) when it was his turn. “I don’t know who he think he’s scaring, that sh*t don’t scare me. Don’t nobody get a chance to redeem their losses, because I sure didn’t. But this shows you where I’m at and how confident I am at beating the fool again.”

Harrison would call Charlo a “cornball” over and over, with Charlo laughing it off.

“When I say it’s never ever been this personal, I’ve grown,” Harrison said afterwards. “Back in the day, five years ago you would have caught me and him face to face, neck to neck, it would have easily broken out into a fight. But I’ve grown, but I’m on fire on the inside. It’s very personal between me and him.”

“I already went 12 with him, so trust me, I hope he gets back on his bike,” Charlo said of what he gained from the first fight. “Nobody sits in there with me like that and trades and exchanges, there’s a reason why.”

The win for Harrison derailed the anticipated Charlo-Hurd bout for three of the belts at 154-pounds. Hurd defends his two belts against former world title challenger Julian Williams this Saturday, May 11, on FOX (8:00p.m. ET/5:00p.m. PT). The winners are expected to meet sometime in the late fall or early winter. Harrison wouldn’t pick a winner but said he will be at the fight as a fan. Charlo said he’s leaning towards Hurd.

“They said Hurd wanted a fight before me anyways,” Charlo said, but admitted he still sees Hurd and himself as the fight that can create a superstar. “Absolutely, it could possibly be but everything happens for a reason and I know Hurd is coming up and I know he has a lot on his hands this weekend as well.”

The first Harrison-Charlo fight was more of a chess match. The rematch figures to be a bit more of a barnburner because of the genuine dislike they have for each other. Harrison will be out to prove the first fight was no fluke and that he can win a clear and uncontroversial decision. Charlo will be looking to do what Leonard Ellerbe said during his opening comments, and deliver “The Big Payback,” James Brown style.

Only six more weeks until we find out who is right.