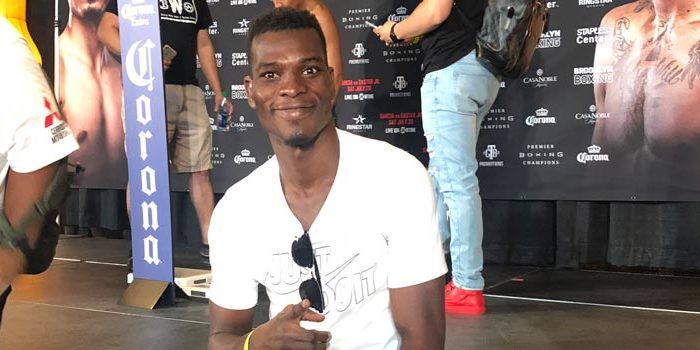 Richard Commey has come a long way from the shores of Accra to arrive at the doorstep of fame. It’s all in front of him now: A long title reign, unification and the accompanying glory.

Commey, 32, has worked tirelessly to reach this point. But the task is far from complete. The next step occurs on Friday, June 28, when he makes the first defense of his IBF World Lightweight title versus dangerous former world champion Ray Beltran.

For Commey, it’s another opportunity that he fought to obtain, en route to his desired destination. He took a big one last February, when he obliterated Russia’s Isa Chaniev in two to win the vacant IBF strap.

Upon returning to Ghana, Commey (28-2, 25 KOs) received a welcome fit for a hero. But he was a wounded warrior. An injured right wrist suffered during the Chaniev bout forced him to cancel an April unification versus WBA/WBO 135-pound champion Vasiliy Lomachenko.

“The doctor gave me the all clear in Ghana,” Commey told BoxingAfrica.com. “But when I came back to the US, we decided to get a second opinion which confirmed that I was ok to start training.”

Commey did some light training in Ghana before returning to the U.S. in early April. He is currently deep in camp with trainers Andre Rozier and Gary Stark Jr.

“We are just concentrating on improving from the last fight and preparing for the next opponent,” said Commey. “We are looking at Beltran and have started working on a strategy to beat him.”

According to Commey, he’s much improved since losing a close decision to Robert Easter Jr. in September 2016, when the two engaged in a furious battle that culminated in Easter winning the then-vacant IBF belt.

“Technically, I am miles better,” Commey stated. “I have learnt so much not just from Andre but from all the team, including Gary Stark and Terrance Simpson. My fitness has improved so much since Andre started sending me to Scooter over in Long Island. I’m just an all-around better fighter and I’m still improving.”

What hasn’t changed is Commey’s desire to be the best, an attribute that shows in the passion with which he fights. He’ll need it against Beltran who, at 37, understands this may be his last chance to wear another strap. The veteran Mexican won the vacant WBO 135-pound title in February 2018 with a 12-round unanimous decision over Namibia’s Paulus Moses. Six months later, he lost it to Puerto Rico’s Jose Pedraza via decision.

Beltran bounced back last February, stopping undefeated Hiroki Okada in nine. The win made Commey sit up, but it wasn’t the first time he took notice.

“I have the upmost respect for Beltran in and out of the ring. I remember a few years ago he fought Ricky Burns in Scotland for the world title and in my eyes clearly won the fight but didn’t get the decision—a bit like me with Easter,” Commey recalled. “But he came back and never gave up and won a world title so I can see similarities in him with me that why I respect him.”

A Commey win sets up a showdown versus 21-year-old, undefeated contender Teofimo Lopez. Brooklyn’s Lopez is expected to face Masayoshi Nakatani on July 19 in a title eliminator for Commey’s belt.

Lopez’s star power is on the rise, and he isn’t ashamed to tell you how good he is.

“A lot of people talk a lot until they get hit,” Commey noted. “I’ve not really seen much of him. I was with my manager at The Garden for the Terence Crawford-Amir Khan fight and he was on the undercard along with Felix Verdejo. To be honest, I wasn’t overly impressed with either one.

Commey’s ultimate goal is a unification versus Ukraine’s Lomachenko. Last April, Lomachenko blew out Anthony Crolla in four and is expected to return later this year versus, England’s Luke Campbell.

Commey believes his size advantage over Lomachenko—who began his career as a featherweight—will be enough to dethrone the pound-for-pound entrant.

But first things first. Beltran (36-8-1, 22 KOs) possesses a right hand that has been known to ruin plans. Nevertheless, Commey says he isn’t overlooking what’s in front of him.

“I’m just glad to be in the position I’m in,” Commey said. “I thank God for all what he has brought me after all the hard work I am now the A-side headlining shows in the US with a championship belt around my waist which isn’t going anywhere soon.”

If Commey can run the gauntlet and defeat Beltran, Lopez and Lomachenko, he would be the most accomplished Ghanaian fighter since Azumah Nelson; with the same brand of humility that endeared “The Professor” to his people.

“I want to thank all my fans in Ghana for their continued support,” said Commey. “The greeting the gave me when I returned with the championship belt is something I will never forget. It spurns me on to train even harder as I know how much joy and proudness it brings my people. For that alone, they can count on me to be their champion.”