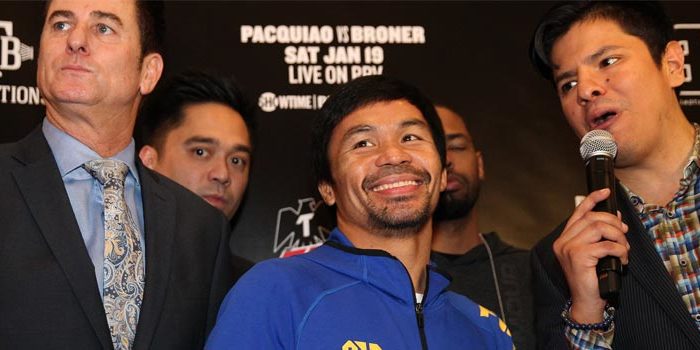 After months of speculation, Manny Pacquiao and Keith Thurman is finally official. The pair of top-rated welterweights will collide in a WBA title consolidation clash July 20 at MGM Grand in Las Vegas, Nevada.

The bout will air live on Fox Sports Pay-Per-View, as officially announced Saturday evening during the latest installment of Premier Boxing Champions (PBC) on Fox.

“I believe Keith Thurman is one of the best pound-for-pound fighters in boxing,” Pacquiao said to Yahoo Sports. “That is why I am fighting him. He has faced and beaten two former welterweight champions, Robert Guerrero and Danny Garcia, and one current welterweight champion of the world, Shawn Porter. I have always looked for the best challenges in my career and Keith Thurman is an undefeated WBA super champion.

“He is the best 147-[pounder] available at this time so I watched some video of Thurman and saw that he brings an exciting style to the ring. That’s what the fans want, two of the best going at it. I want to entertain the fans.”

Both boxers fought on back-to-back weekends in January, each scoring 12-round wins. Pacquiao (61-7-2, 39KOs) turned away the challenge of former four-division titlist Adrien Broner in their January 19 Showtime PPV headliner, which sold nearly 400,000 units in what was Pacquiao’s debut under the PBC banner.

The event demonstrated the in-ring capabilities still exiting in the Filipino southpaw, who’s won titles in a record eight weight divisions and is a guaranteed first-ballot Hall of Famer. The PPV success indicated his ability to still sell an event.

Pacquiao is second only to Floyd Mayweather in terms of PPV units sold in the 21st century. Fittingly, the two combined for the best-selling event of all time, their May 2015 stinker of a championship fight selling 4.6 million PPVs and generating more than $600 million in total revenue between PPV sales, live gate and sponsorship.

The 40-year old punching politician—who is an active Senator in his native Philippines, where he is campaigning for a second term in the nation’s upcoming elections on May 13—has since won four of his last five starts.  The lone loss came in a widely disputed 12-round defeat to then-unbeaten welterweight Jeff Horn in their July 2017 clash in Australia.

Two wins followed that night, including his aforementioned 12-round nod over Broner at the MGM Grand where he will fight for the 11th time in his incredible career.

Thurman (29-0, 22KOs) returned to the ring one week after Pacquiao’s win over Broner, his first fight in nearly two years resulting in a tougher-than expected decision win over Josesito Lopez. The bout aired live in primetime on Fox, with Thurman having also previously fought in similar capacity on NBC and CBS, all playing to favorable Nielsen ratings.

The win over Lopez marked the fifth defense of at least one full version of the welterweight title for Florida’s Thurman, who took an extended break following a 12-round title unification victory over Danny Garcia in March 2017.

Thurman will fight in Las Vegas for the fifth time in his career, all coming at the MGM Grand. His upcoming clash with Pacquiao will mark his debut as a PPV headliner.