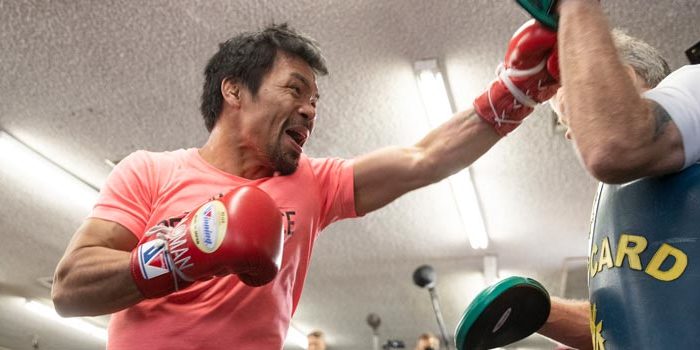 As officially reported last week, Manny Pacquiao will get back into the ring on July 20 to face unbeaten welterweight champion Keith Thurman in what could be a highlight fight of the summer.

Pacquiao, 40, dominated Adrien Broner to retain his portion of the welterweight title in January. He will take on Thurman for the WBA belt.

Pacquiao is the WBA’s “regular” champion at the weight, while Thurman is the “super” champion.

The fight will be on Fox pay-per-view from the MGM Grand Garden Arena in Las Vegas.

And the Filipino champion has no problem with the recently released odds on the fight.

The oddsmakers have made Thurman the slight favorite in the contest, which is music to Pacquiao’s ears.

He says the last time he was viewed as a big underdog, it was the 2008 bout with Oscar De La Hoya – which Pacquiao dominated and sent De La Hoya into retirement. Although Pacquiao was also an underdog in the 2015 contest with Floyd Mayweather.

“Beautiful. That’s what I want [to be the underdog],” Pacquiao told Rappler. “(Just like with Oscar) De La Hoya. It’s going to be an added motivation.”

“Thurman’s never fought somebody like the Senator,” said Gibbons.

Thurman snapped a two year layoff earlier this year, when he outpointed Josesito Lopez over twelve rounds. Thurman had some struggles in the fight, and he was seriously hurt in the seventh round.

After that fight, Thurman called for a showdown with Pacquiao.