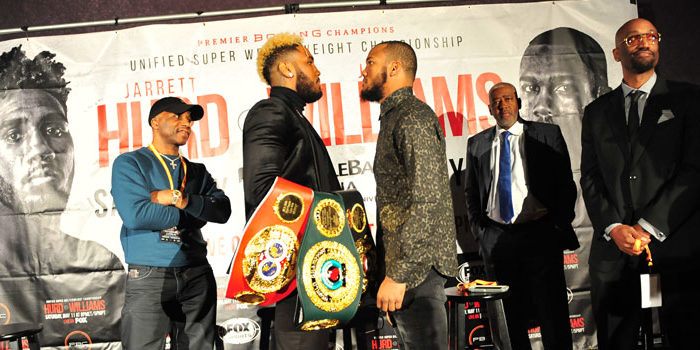 Both fighters have shown that they are ready and poised heading into this weekend’s fight, as displayed on last week’s international media conference call when they went back and forth ahead of this highly anticipated super welterweight match.

“My confidence level is sky high,” said Hurd, a Maryland-native who will be defending his title in his home region for the first time since becoming a world champion. “I want to make it one-sided all the way through. I have a different game plan for each fight. You never know what style I’ll bring out.”

“My confidence doesn’t come from his vulnerability,” said Philadelphia’s Williams. “My confidence comes from my own ability and what I know I can do in a boxing ring. He’s been able to overcome any vulnerabilities he has, but he hasn’t faced me yet and hasn’t overcome what I bring to the table.”

Hurd has been embraced by his DMV (D.C.-Maryland-Virginia) home, partnering with the Washington Redskins and appearing at events all over the area including the National Cherry Blossom Festival parade, the Broccoli City Festival and an MLS game for the D.C. United.

“When I first heard it was official I’d be fighting at home, it meant everything to me,” said Hurd. “Winning the world title was always a dream of mine and I accomplished that two times. Now I just want to defend it in front of my people. It’s the perfect time to come home and it’s going to be a special night.”

For Williams, he looks at the positive spin of fighting on his opponent’s home turf, “I see it as a good opportunity,” he said. “I don’t really think too much about how difficult it would be to fight him in his hometown. I just need an arena and some gloves. Just ring the bell, that’s all I’m thinking about.”

The 29-year-old Williams is riding a four-fight winning streak since losing his first shot at the 154-pound title in 2016 against Jermall Charlo. With strong wins over Ishe Smith and Nathaniel Gallimore included in that streak, Williams can culminate his climb back to the top on May 11.

“I knew 100% that I would get another shot,” said Williams. “I know that I’m a top 154-pound fighter. I just had to get back in there and keep fighting. You can’t stay down too long. You just get back up on the horse. I knew this time would be coming.

“I think that all of my fights have prepared me for this opportunity, not just the Charlo fight. I learned from the 21 fights I had before that too. The Charlo fight gave me a chance to go back to the drawing board and work on a bunch of things. I have championship experience and that’s invaluable.”

In April 2018, Hurd unified 154-pound titles by defeating WBA titlist Erislandy Lara in a thrilling contest that saw Hurd drop Lara in the final round to edge the decision on the scorecards. It was the consensus 2018 Fight of the Year, including recognition from the BWAA, ESPN, Sporting News and more.

“For me to be in a Fight of the Year against a fighter with Erislandy Lara’s style, I must be an exciting fighter,” said Hurd. “When fans tune-in to watch me, they know the fight is usually action-packed. I go out there and leave it all in the ring and give it my all every time.”

Both fighters appear geared and ready for an exciting and dramatic contest for 154-pound supremacy live in primetime this Saturday night.

“A lot of fighters say they had a good training camp, but this has really been the best camp of my life,” said Williams. “I did some different things and I added some difference pieces. We’re prepared for a really good fight and we’re prepared to win.”

“I don’t want this fight to be close,” said Hurd. “I’m trying to get the recognition that I work hard for. I think I have a better resume than guys at the top of the pound-for-pound list. I’m going to come out and prove it Saturday night and make a statement on FOX.”

Tickets for the event are on sale now and can be purchased through Ticketmaster: http://ticketmaster.com