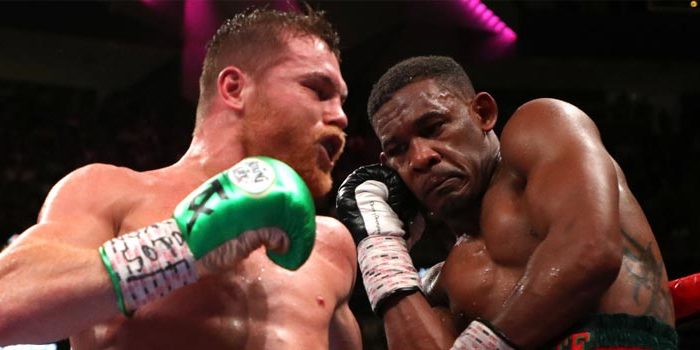 Saul “Canelo” Alvarez is now the WBA, WBC and IBF World Middleweight Champion. Alvarez added the IBF trinket to his collection with a close, 12-round unanimous decision over Daniel Jacobs at T-Mobile Arena in Las Vegas, Nevada.

“It was just what we thought,” Alvarez said afterward. “We knew he was gonna be a difficult fighter. But thank God we did things the right way, the things we were supposed to do.”

Indeed, Jacobs proved to be a difficult, formidable challenger. The Brooklyn, New York native was a 6-1 underdog going in. But he didn’t fight like it. “The Miracle Man” was the busier fighter in the first, pumping his jab and occasionally backing Alvarez up with power shots.

The 6’0″ Jacobs used his three-inch height advantage to great effect throughout the fight. Mexico’s Alavrez began letting his hands go in the second, still throwing less than Jacobs, but far more efficiently. The action see-sawed through this early rounds. Alvarez hit his stride in the middle frames, landing well-placed shots to the head and body.

It appeared as if he might pull away heading into the second half of the fight, but that wasn’t the case.

Jacobs came on strong, just as Canelo–who is prone to do so–appeared to fatigue. The underdog switched back and forth from orthodox to southpaw, perhaps too often, but nevertheless still effectively. The eighth round featured the best action of the fight as the two elite 160-pounders stood their ground and went toe-to-toe. Jacobs ate several hard shots, but refused to fold, backing Canelo up with his own power punches.

Jacobs carried that momentum into the ninth and 10th rounds. The athletic former amateur standout walked Canelo down behind the jab, maneuvering him toward the ropes, where he would land combinations up and downstairs. Canelo occasionally responded with single shots, but appeared tired and unable to do more.

The fight was still up for grabs heading into the final two stanzas. After edging the 11th, Canelo upped his activity in the final round, landing a series of power shots and fighting with greater urgency than the surprisingly passive Jacobs. Those two rounds proved to be the margin of victory when the scorecards were announced.

According to unofficial CompuBox statistics, Alvarez with landing 188-of-466 overall punches, 57 more than Jacobs (131-of-649).

Canelo was asked about a potential third bout against former world middleweight champion Gennadiy Golovkin, who was seated ringside.

“For me, we’re done,” said Alvarez regarding Golovkin. “But if the people want another fight we’ll do it again, and I’ll beat him again.”

Golovkin is expected to take on unheralded challenger Steve Rolls on June 8. A third fight versus Canelo could occur in the fall.

However, before that can occur, Canelo will have to deal with unbeaten mandatory challenger Jermall Charlo. Alvarez may be forced to vacate his title if a fight versus Charlo isn’t next.