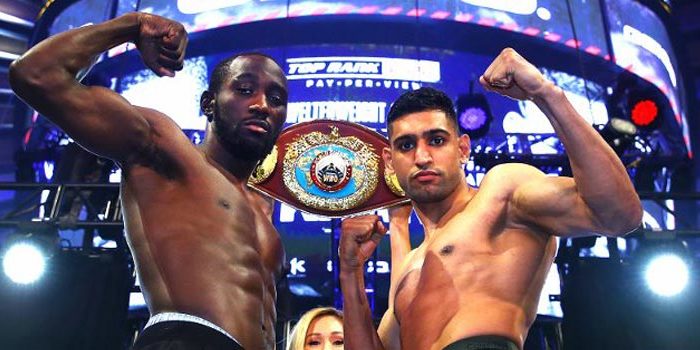 Handicappers have predicted that much more will separate Terence Crawford and Amir Khan on Saturday night than Friday afternoon.

Crawford and Khan were almost exactly the same weight when they stepped on the New York State Athletic Commission’s scale Friday afternoon at Madison Square Garden in New York. The 31-year-old Crawford weighed 146.4 pounds, slightly less than the 32-year-old Khan (146.6) for their ESPN Pay-Per-View main event Saturday night at The Garden.

Crawford (34-0, 25 KOs), of Omaha, Nebraska, is consistently listed as a 16-1 favorite over Khan (33-4, 20 KOs), of Bolton, England. Crawford – a three-division champion commonly considered at least one of the top two boxers, pound-for-pound, in the sport – will attempt to make the second defense of his WBO welterweight title in their 12-round, 147-pound championship match.

Prior to Crawford and Khan making weight, Teofimo Lopez and Edis Tatli met their contractual obligations on the NYSAC’s scale.

Before Lopez and Tatli made weight, Shakur Stevenson and Christopher Diaz each came in under the featherweight limit of 126 pounds for their 10-round bout.

The most difficult fight of Stevenson’s two-year pro career will be the second of four fights ESPN Pay-Per-View will air.

Earlier Friday afternoon, Felix Verdejo and Bryan Vasquez made weight for their 10-round lightweight bout.