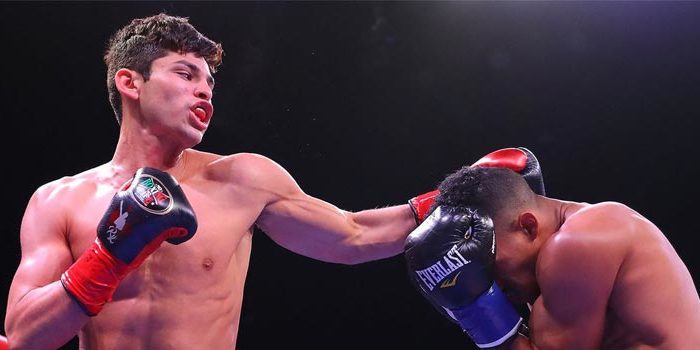 It’s already been a wild year just three months in for Ryan Garcia, who hadn’t even yet stepped foot in the ring prior to Saturday.

Two rounds later, he has an in-ring memory in 2019 to savor.

Lopez was down late in round two and barely beat the count but was deemed in between rounds unfit to continue in the DAZN-streamed main event.

Garcia came into the contest having just become a father a week ago, and his strong social media presence serving to his detriment as he was caught up in baby drama mama while training for this bout. The baby-faced prospect was able to put it all behind him heading into what was supposed to be a step up in class.

Somebody forgot to tell Lopez, who came in with desire but was hopelessly overmatched. The journeyman boxer from Puerto Rico sought to make things uncomfortable for his much younger foe, but it never quite took.

Instead, it only fueled Garcia’s fire. The Californian—who has now sold out this venue in each of his three appearances within his past five starts—rode out a desperation flurry from Lopez to score a three-punch combination to rock his foe late in the round. Lopez managed to remain on his feet, but was already in retreat mode just three minutes into the evening.

Garcia was a bit wild with his punches, but the leverage he was getting on his power shots was a testament to the growth he’s experiencing under the tutelage of Eddy and Chepo Reynoso. Or at least, it was enough to impress their star client.

“He’s the kind of fighter who does in the ring what he does in the gym,” Saul ‘Canelo’ Alvarez, the reigning World middleweight king and Garcia’s stablemate said of the young star on the rise. “He’s the best prospect in the world today.”

Such high praise better come with in-ring results. Garcia provided just that in round two. He had Lopez hurt on two occasions early, both times beginning with hammering right hands which had Lopez awkwardly turning away his head as if already in surrender mode.

With a knockout well within his sights, Garcia went in for the kill. A series of power shots at an unsteady target culminated with a left hook to send Lopez to the canvas for the bout’s lone knockdown. He made it to his feet in time to beat the count, which took him to the bell and out of the round.

His physical state, however, would disallow him from making it off of the corner stool. Not another punch would be thrown as the bout was stopped at 3:00 of round two.

Garcia rolls to 18-0 (16KOs) with the win, his second with the Reynosos. There remains work to be done in his development—even if he believes he’s ready to take on the world.

On his mind quite a bit as of late has been unbeaten 130-pound titlist Gervonta Davis, enough to where Garcia saw fit to attend his most recent bout last month in Carson, Calif. The two have enjoyed some back-and-forth since then, but more so between Garcia and Davis’s promoter, Floyd Mayweather who has had some choice words for the young man.

Following the statement he made in the ring, Garcia saw fit to make one on the mic.