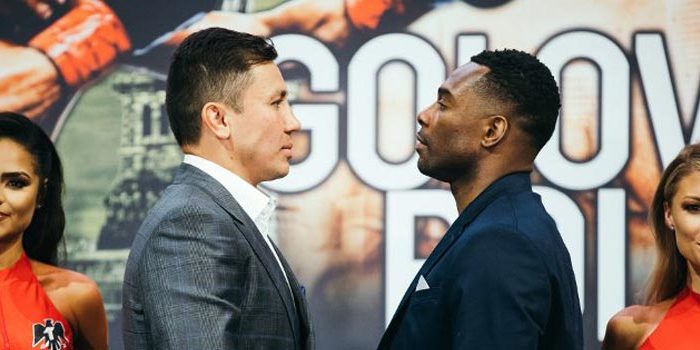 Steve Rolls readily admits Gennady Golovkin thrives on the elite level at which Rolls has yet to compete.

But the undefeated middleweight from Toronto has held his own in sparring sessions against former 160-pound champions David Lemieux and Billy Joe Saunders. Rolls also has fared well with former WBC light heavyweight champ Adonis Stevenson while wearing headgear and bigger gloves.

Those experiences have helped build Rolls’ confidence while awaiting the type of opportunity he intends to exploit June 8 at Madison Square Garden. The fact that virtually no one is giving him a chance has only provided more motivation for the unknown Rolls since his fight against Golovkin was officially announced last week.

Rolls addressed his position as a huge underdog during a press conference Monday at Madison Square Garden.

“I’ve been doing a lot of reading lately,” Rolls said, “and a couple of things I keep coming across is, ‘Who is this guy?.’ And, ‘This is gonna be a tune-up fight.’ Well, just to tell you a little bit about myself, I’m a guy that’s been flying under the radar for quite some time now, a guy that’s continuously had ups and downs in his career, but continued to push forward. I’ve been trying to get fights with guys in the top 20 to showcase myself to the fans and to the critics, and with the goal of eventually establishing myself as one of the middleweight elite.

“So, I guess it’s safe to say that, you know, I’m an underdog that’s been hungry for this position. Make no mistake, this isn’t a tune-up. I’m coming to fight. And with everybody just getting to know me now, after June 8th, they won’t forget me. I’ve got much respect for Gennady Golovkin, but I’m coming to shock the world.”

The 35-year-old Rolls (19-0, 10 KOs) considers his eight-round, split-decision defeat of favored Demond Nicholson (then 17-1-1) the biggest win of his career. Showtime aired Rolls-Nicholson as part of its “ShoBox: The New Generation” series in June 2017.

The 37-year-old Golovkin (38-1-1, 34 KOs) will fight for the first time since Canelo Alvarez edged him by majority decision in their 12-round middleweight championship rematch September 15 at T-Mobile Arena in Las Vegas. Golovkin has since signed a six-fight contract with DAZN, which is expected to include his third fight against Alvarez (51-1-2, 35 KOs).

“Nobody was more surprised than Steve when he got that call and [I] said, ‘We got the Triple-G fight,’ ” Lou DiBella, Rolls’ promoter, said Monday. “He’s been waiting for a long time for a chance. He’s been waiting a long time for his moment, his shot. But did he expect that it was gonna come against a legend? He didn’t think it was gonna come against a legend. But I promise you – I promise you – that on June 8th he’s gonna prove that he belongs. That he belongs with the best middleweights in the world, that he is a middleweight contender and that he is capable of beating the best.”