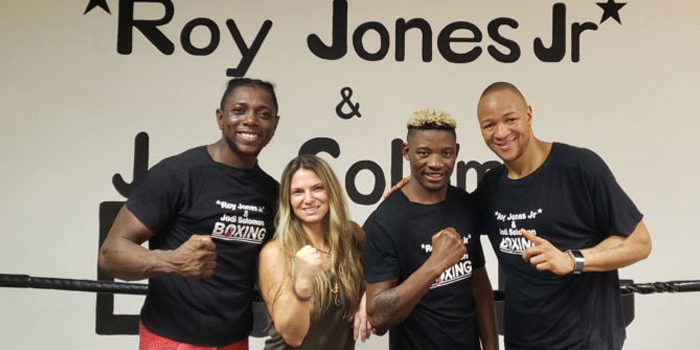 Jodi Solomon may barely match the height of the boxers she trains, yet that doesn’t mean the boxing manager can’t put up a good fight. In fact, her journey with the sport, as both a trainer and manager, consisted of a few draining battles.

Twenty-five years ago, a young Jodi Solomon walked into a boxing gym. A lifelong dancer with an interest in all things sporty, she soon realized that she was destined to live her life between the ropes,

“I’ve always been game to try new sports activities…” she explains, “When I walked into a boxing gym, it just made perfect sense to me… It was like a fire had been ignited in me.”

As boxing has a lot to do with rhythm and movement, Jodi’s background as a dancer made her the perfect candidate to take up the sport. Unfortunately, while she had the passion, drive and physical ability to adopt the sport, the lack of female boxers during that time led to her putting her dreams on hold. However, a chance meeting with boxing world champion Cassius Baloyi revealed that, while she couldn’t become a professional boxer, she didn’t have to let her passion die. In fact, after suggesting that she live out her passion for boxing through managing, Baloyi introduced Jodi to her first – and probably most successful – client, Issac Chilemba.

Under the tutelage of Jodi, Issac Chilemba went on to win 5 titles locally before Jodi took him to the United States and relentlessly worked to get him signed by DiBella Entertainment. Also, Chilemba has been ranked No.1 in the world a total of three times. Additionally, it is through working with Issac that Jodi became good friends with boxing legend Roy Jones Jr.

Considered by many to be one of the greatest boxers of all time, the relationship between Jodi and Roy led to them opening a boxing gym in Johannesburg, South Africa where Jodi teaches Roy’s style of boxing to her clientele,

While boxing has played a tremendous role in Jodi’s life, there are skeptics who regard the sport as violent and dangerous. Nonetheless, Jodi maintains that there’s more to the sport than just hitting blows. In fact, it teaches plenty of lessons that can be readily adopted into our daily lives,

“Boxing takes discipline, dedication, humility. You are tested every time you step into the ring and it gives you an opportunity to learn from mistakes. It’s a metaphor for life“. Furthermore, Jodi also admires how the sport has become a pivotal point in the lives of her clients, “The boxing guys come from nothing. Boxing is about having a desire to better yourself and it’s their only way out. They are literally fighting their way to a better life. They’re my heroes and I’m humbled by them every single day.”

As a result of the invaluable life lessons that boxing can teach, Jodi and her boxers have decided to create an anti-bullying campaign in the gym with the hope of getting it implemented into schools,

“Every single one of us in this boxing gym has been bullied and boxing has been the thing that’s pulled all of us out of it.”

Jodi assures that using boxing as part of an anti-bullying campaign won’t promote violence, but will instead highlight how it’s a great stress-reliever and how it’s empowering. Furthermore, boxing also teaches humility, self-discipline, self-respect and most importantly, respect for others: “It’s about having goals and having a desire to better yourself.”

Despite Jodi’s long list of accolades, including being voted Boxing South Africa’s manager of the year in 2010, she admits that she still deals with naysayers who doubt the efficiency of a woman in the boxing world.

“It wasn’t joyously received that a woman was stepping into a man’s domain,” she admits, “I fight battles every day. I have accomplished a lot – some, more than men. I have to work three times as much to get recognition yet all of those hurdles are what pushes me to succeed because it’s what brings me joy.”

So how does she see the future of women entering male-dominated areas?

“When my daughter left school, the biggest fear that I had was that she wouldn’t follow her heart if her heart was in a job that was technically not a woman’s job,” Jodi revealed, “There is nothing you cannot accomplish. It’s scary but it just takes a leap of faith and belief in yourself.”

And her secret to success?

“The most important thing is to do something you love because if you do something for recognition or money when entering a man’s word, if you don’t get it it’s going to be very difficult” she explains “As long as you love it and it keeps your fire alive, just keep pushing forward and the right kind of success and recognition will come”