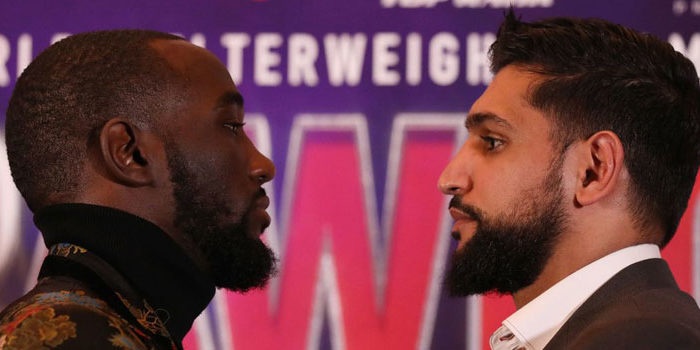 Amir Khan had the opportunity to secure a very large payday against his bitter domestic rival Kell Brook.

But instead he accepted an assignment that was widely viewed as being far more dangerous, and for a little less money, against Terence Crawford.

Khan views Crawford as a legacy fight, a fight where a victory could elevate his entire career. Crawford is regarded by many observers as one of the best, if not the best, pound-for-pound fighter in the sport.

Khan will challenge Crawford for the WBO welterweight title on April 20th at Madison Square Garden in New York City.

The Bolton boxer feels that he’s personally been tested in many tough contests, while at the same time he sees Crawford as a fighter who was always matched in perfect situations

“This is my own weight. I’m not going to experience the power that Canelo has. [Crawford] has a lot of skill and speed. It will be a game of chess at times, and then there’ll be a time we’re both going to have to dig deep and pressure one another,” Khan said The Los Angeles Times.

“Crawford has had these fights that are walks in the park, where he’s beaten guys quite comfortably and not gotten into a messy fight. I’ve been quite the opposite. I’ve been in that place where it’s been a hard, rough fight. I don’t think he has.

“Crawford is very clever, but he hasn’t fought anyone who can box as well as him, so there’ll be new things he’ll see, and that’s why I took the fight. I took a week to break down the fight when they offered it to me, and I thought it was perfect for me. I like the way he fights – very brilliant, very dangerous – but that’s what lifts me. I need the biggest fights to motivate me, to get me into my best condition and get me truly ready for a real fight.”