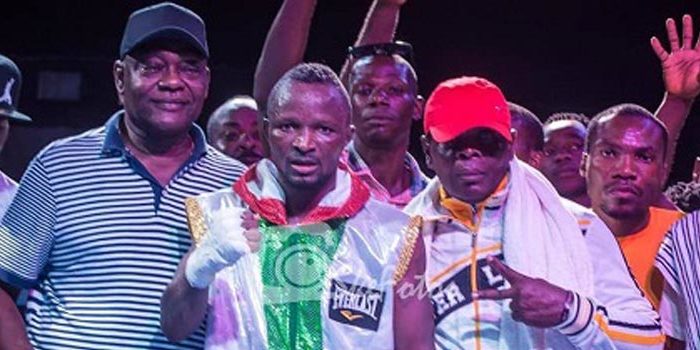 Joseph “King Kong” Agbeko (35-5, 26 KOs), retained his WBO Africa bantamweight title with a 12-round unanimous decision over Shabani Hashimu Zuberi at the Aborigines Beach Resort at Keta in the Volta Region.

Agbeko outclassed Zuberi, but the stubborn Tanzanian took him to the full 12 rounds with no signs of fatigue.

Agbeko kept his work rate high throughout the bout but failed to get the much-desired knockout, as the 23-year-old Zuberi (15-4, 5 KOs) continued to come forward. Nevertheless, he lacked the skill to compete with Agbeko, even the aged version we witnessed on Saturday night.

Zuberi displayed some flashes of speed when he let his hands. But was kept at bay with by consistent jabs from Agbeko which left his face badly swollen. He also suffered multiple cuts around his eye.

The bout, under the auspices of Aborigines Promotion and dubbed “The clash of the Titans,” was well patronized. Among those in attendance were former President Jerry John Rawlings and other fistic luminaries.

“It was a good fight,” said Agbeko afterward. “Zuberi is much younger and energetic so it is good for me. Now I have to get back, train more and find out what my management has for me. Definitely, I am eyeing a world title.”

Agbeko has a long climb back to world title contention. But for now, he notches another victory in what has been a storied career.