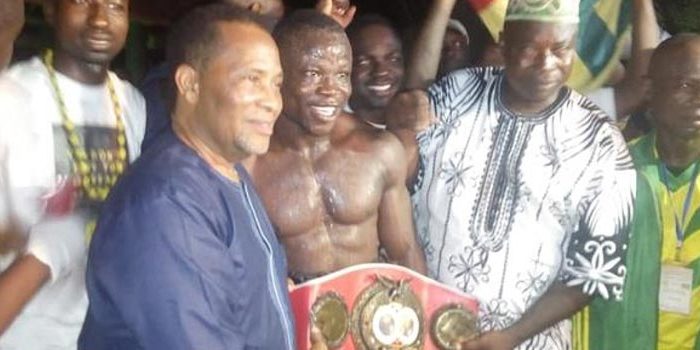 Togo’s John Koudeha (16-0, 13 KOs), who resides in Ghana, won the IBF African Middleweight belt after a fourth-round TKO over Victus Kamevor at the Aborigines Beach Resort at Keta in the Volta region.

The bout was part of the Joseph Agbeko-Shabani Zuberi undercard.

The 28-year-old Koudeha was swift and creative in the ring. Kamevor simply could not handle his agility.

Koudeha displayed energy and power to remain undefeated in front of a large group of family and supporters, many of whom traveled from Togo to cheer him on.

Afterward, Koudeha labeled the fight as one of his greatest nights ever, breaking into tears.

“I shed tears of joy simply because I believe my hard work and training paid off,” Koudeha said.

Koudeha’s first started boxing at age 15. His confidence continued to grow, emboldening him to make it a career. He turned pro at 18, in 2016 against Agyeman Prempeh Boateng at the Police Officer’s Social and Fitness Centre in Accra.

Koudeha continued to rack up victories and also learned plenty along the way. Although he won against Kwesi Tutu in his last fight at the Woezor Hotel in Ho, the Togolese pugilist said, “that was my most difficult fight ever.”

And this one was one of his greatest. Koudeha, a pacey boxer whose landing punches are friendless, describes himself as the “African Mike Tyson.”

“African Mike is a name I chose because I’m a big fan of Tyson and needed an avenue to tell the world about myself and my talent” Koudeha said.

“So, I ride on his name with all pleasure,” he added.

Having been featured on several undercards and invitational fights, Koudeha says he has always longed for a title.

With the IBF Africa 160-pound strap, he now has taken a major step toward a world title. If he continues on this path, it won’t be long before the undefeated Koudeha is headlining his own shows.