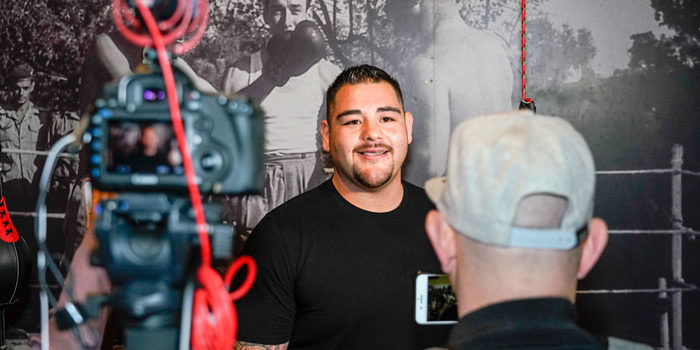 Heavyweight contender Andy Ruiz Jr. (31-1, 20 KOs) is very motivated for his planned return on April 20 as part of Premier Boxing Champions on FOX card from the Dignity Health Sports Park in Carson, California.

Ruiz will face the very tall Alexander Dimitrenko, who is coming off a fall TKO defeat at the hands of Bryant Jennings.

Ruiz makes his debut under the PBC banner and fights for the first time since July of last year, when he won a decision over Kevin Johnson.

In the main event of that card, Adrian Granados will face former two-division world champion Danny “Swift” Garcia in a twelve round welterweight bout.

Ruiz, who for most of his career was promoted by Top Rank, is looking for a fresh start in two weeks.

He’s been studying a lot of footage on Dimitrenko and believes that he’s put together the right game plan.

“All the hard work in the gym has been paying off and I feel prepared for April 20. I’m facing an experienced guy who’s tall, but I think my pressure and my speed will make it difficult for him. We’ve looked at Dimitrenko’s past fights and put together a game plan. We’re going to stick to it and execute. We’re going to attack the body and I think with my speed and combinations I’m going to get him out of there,” Ruiz said.

“I’m coming back from a layoff but it’s over and right now my goal is to make a statement and let everyone know that I’m back in action. I’m ready to take one of the spots at the top of the division. There are a lot of big fights I want, but my mind is totally focused on April 20. I’ve never been this motivated. I’m going to be fighting more often and I’m glad to have the opportunity.

“Fighting for the Mexican fans gives me more motivation now than ever. I want to be the first Mexican heavyweight champion of the world and hopefully this year or next year I will accomplish those dreams. I have everything I need now to get to where I want to go. This is just the beginning. The more fights I have, the better I’m going to be looking.”