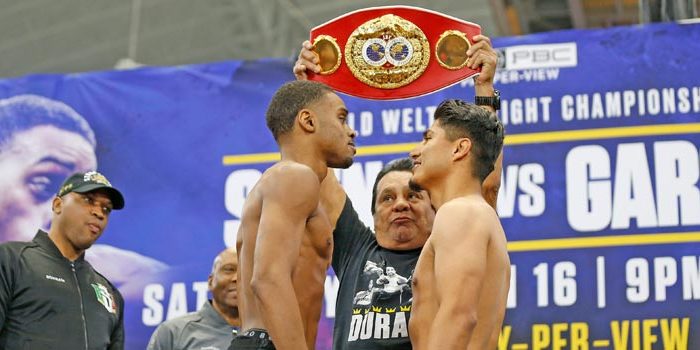 ARLINGTON, Texas – One weigh-in down, one to go. Errol Spence Jr. and Mikey Garcia made weight Friday afternoon for their 12-round, 147-pound title fight Saturday night at AT&T Stadium.

The 29-year-old Spence, of DeSoto, Texas, stepped on his state commission’s scale at 146¼ pounds, slightly more than Garcia.

The 31-year-old Garcia (39-0, 30 KOs), of Moreno Valley, California, officially weighed in at a career-high 145 pounds. Neither Spence nor Garcia can weigh more than 157 pounds – 10 above the welterweight limit – at the IBF’s second-day weigh-in, scheduled for Saturday morning in Dallas.

Those close to Spence expect the IBF welterweight champion to weigh at least 165 pounds when he enters the ring late Saturday night for their FOX Sports Pay-Per-View main event. The 5-feet-6 Garcia, who’s four inches shorter than Spence (24-0, 21 KOs), said during a press conference Wednesday that he’ll weigh 150 pounds once he encounters the strong southpaw.

Even if Garcia intentionally estimated his fight-night weight, Spence should out-weigh him by at least 10 pounds. Before Friday, Garcia had not officially weighed more than 139½ pounds for any of his first 39 professional fights.

The four-division champion technically will move up from the lightweight limit of 135 pounds to the welterweight maximum of 147 to challenge Spence in a battle between two of the top boxers, pound-for-pound, in the sport.

Garcia defeated previously unbeaten Robert Easter Jr. by 12-round unanimous decision in his last appearance – a 135-pound title unification fight July 28 at Staples Center in Los Angeles. The ambitious Garcia had moved down from 140 pounds to 135 to beat Easter.

In his prior fight, Garcia dropped then-unbeaten Sergey Lipinets in the seventh round and won a 12-round unanimous decision to win the IBF junior welterweight title last March 10 in San Antonio. Garcia weighed in at 139½ pounds for each of his two 140-pound bouts – points wins over Adrien Broner and Lipinets.

Spence’s size advantage is the primary reason most Internet & Las Vegas sports books list Spence as a 4-1 favorite over Garcia, who has won world titles at 126, 130, 135 and 140 pounds.

Below are the official weights for each of the six boxers scheduled to fight on the FOX Sports Pay-Per-View portion of the Spence-Garcia undercard Saturday night: