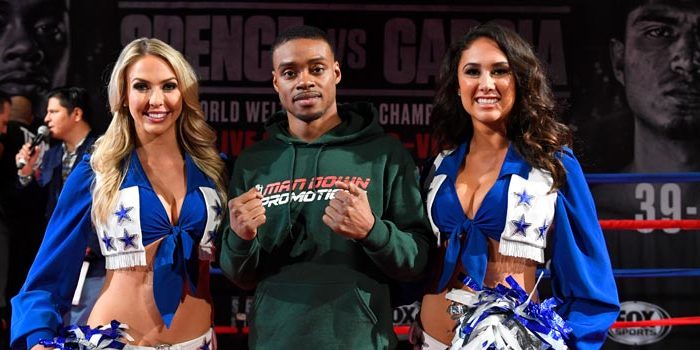 Unbeaten IBF Welterweight World Champion Errol Spence Jr. and undefeated four-division world champion Mikey Garcia made their grand arrivals for fight week Tuesday and participated in an open to the public media workout as they near their blockbuster showdown that headlines a Premier Boxing Champions on FOX Sports Pay-Per-View event this Saturday from AT&T Stadium in Arlington, Texas.

Tuesday’s event at Renaissance Dallas Hotel also featured fighters who compete on the pay-per-view undercard Saturday night making their grand arrivals and showing off their skills for the fans and media in attendance.

Tickets for this showdown, which is promoted by TGB Promotions and Ringstar Sports, are on sale now, and can be purchased at SeatGeek.com, the Official Ticketing Provider of AT&T Stadium.

Here is what the fighters had to say Tuesday from a packed ballroom at the Renaissance Dallas Hotel:

“It means a lot to have all these fans out here today supporting me. This is where I started. This is where my heart is. I’m going to give everyone a great show on Saturday.

“I’m making sure that I don’t get caught up in the moment. I’ll do think about the moment after the fight and celebrate with my people. I’m tunnel vision on Saturday night and I can’t wait. My motto is ‘Man Down’ and I’m here to again show everyone why I’m the best.”

“It’s amazing to have this great support from the local fans and media here. I’ve fought in Texas many times and won two world titles here. I’m looking for a third on Saturday.

“I have the timing, the speed, the footwork and defense. I have all the skills needed to win this fight. I could have taken easier fights than this, but they didn’t spark the fire in me. This fight does exactly that.”

“J’Leon Love is always going to be a tough fighter and make the fight hard. He can punch and he can move. I’m expecting a hard fight and I have a game plan for anything he brings on Saturday.

“It’s amazing to be on this stage. It’s really a dream come true. This is as big as my title fight. This is going to be a massive event so I have to get a knockout for my fans.”

“I’m hungry just like every other fighter. I’m hungry like a boxer who is having their first moment in the sport. That’s how I feel right now.

“I’m not going to be an easy fight for Benavidez. The Peter Quillin fight is behind us. There were some things happening that didn’t allow me to be great, but I’m over them now and I’m ready for a spectacular performance Saturday night.”

“It’s going to be a real war on Saturday night. I’m prepared for a very tough fight. My opponent leaves his guard open a lot and I think I can knock him down with my hooks. I’m ready to get a great victory.

“I’m very proud and happy to be competing on this great pay-per-view card. I think I’m going to score the knockout in round five or six and show everyone why I’m the best bantamweight in the world.”

“I’m the type of fighter that lets the fight unfold and develop. I have to see how my opponent is going to react and be intelligent.

“My speed is going to be a big key. Both with my hands and my legs. I have to avoid getting hit by the big shots. I’m going to take it round-by-round.”

“I know that he’s a fighter who is going to be crafty and try to move around. He’s going to try to keep me off balance and that’s why I made sure I came in great shape for this fight so I can chase this kid around.

“I have to be smart and work behind my jab, while also being aware of what he can do with his left hand. This is a fight to show that I’m back and ready to challenge the best heavyweights.”

“We’ve been training to steal the show on Saturday night. Chris is going to keep coming forward. I’m going to have to rely on my youth, my foot work, my speed and my brain so I don’t take unnecessary shots.

“It’s definitely an honor to be on this platform. For me to find myself in this position, it’s hard to put into words. I’m going to get a definitive win on Saturday night.”