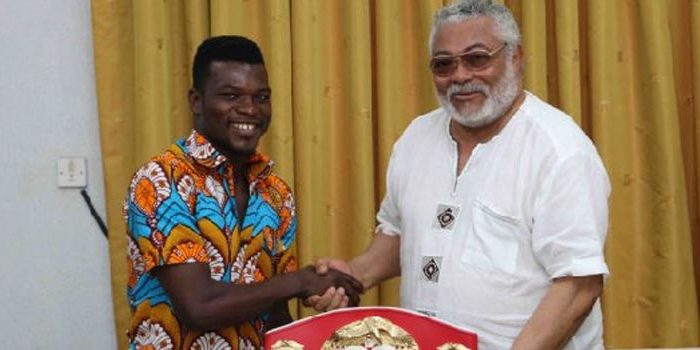 Former Ghana President Jerry John Rawlings has called for a concerted national effort to offer boxing and other popular sports the needed support to enable athletes to excel.

Referring to the resurgence of boxing achievements in Ghana, the former president noted that: “When the soul of this country wants to pick itself up, it manifests in sporting achievements, especially boxing.”

Speaking during a courtesy call paid to him by the newly-crowned IBF World Lightweight Champion Richard Commey on Wednesday, the former president commended President Akufo-Addo for his interest in sports, and the decision to reward the new champion with a vehicle and GHS50,000.

Rawlings expressed disappointment that some of Ghana’s financially endowed footballers have made little effort to commit towards the development of sports in the country, stating that a little investment will make a significant difference.

In congratulating Commey for his achievement, the former President cautioned him not to allow the victory to get into his head.

“Get a grip of yourself. It’s always easy to let your guard down when you get to the top. As an award-winning fighter pilot, I never allowed it to get to my head. I always felt there was something to learn. That’s the way it has been to this day,” Mr. Rawlings counseled Commey.

The former President, himself a boxing enthusiast, told Commey not to be overconfident or under-confident, urging him to work harder every time.

“Avoid drinking, smoking and womanizing and hold yourself well so you can reap the fruits of your labor,” he said.

Commey and his team later presented the title belt to the former President.