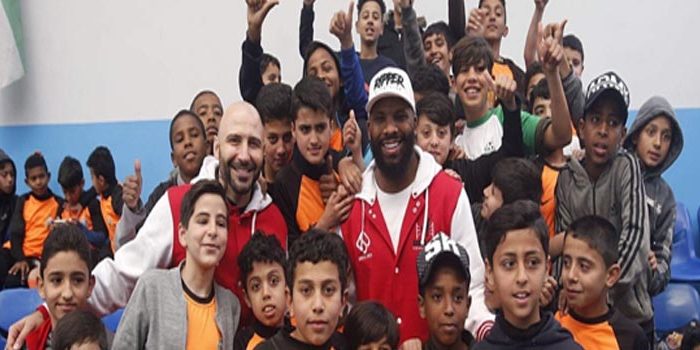 Two-Division World Champion, philanthropist and entrepreneur Badou Jack made good on his promise to give back to refugee children abroad as he visited the Baqaa Refugee Camp in Jordan Saturday as part of his overall mission to give children around the globe a fighting chance at life through his Badou Jack Foundation.

“I promised my friends at the Baqaa camp I would be back and was so happy to see and spend time with them again,” said Jack. “I’m truly blessed to be in a position to help these children in need.  As a Muslim, my duty is to help those in need.  In order to serve God, you have to serve humanity. It meant more to me than anything to see the smiles on their faces when they saw me again.”

Jack was greeted by the Prime Minister of Jordan Omar Al Razzaz upon arrival as he supports Jack’s excellent work and dedication to the region. During the visit to the camp, Jack officially launched the Badou Jack Education Center – a state of the art facility to that will hold extracurricular activities for the children as well as teach computer skills, language and literacy.

“The Badou Jack Education Center is something that I take a lot of pride in, to help these kids create a better life for themselves,” continued Jack.  “My wife Yasemin visited the camp with me this trip, and we are both committed to giving these children all of the tools necessary to succeed and have a fighting chance in life.”

As part of his commitment to the camp, Jack is personally dedicated to watching over 15 orphans. This includes meals, clothes and additional expenses. The Badou Jack Foundation will offer them computer, technology and language education to help them with essential tools to help build their futures.

He is also working closely with the camp to sponsor the education of a boy with cerebral palsy. Sixteen-year-old Ayoob, who has had four surgeries, is completely illiterate as no school in the area would take him in, therefore Jack will be funding a special educator to teach him how to read as well as equip the camp to be handicap compatible.

This is all made possible by Jack himself as well as the funds raised through the Badou Jack Foundation. But it doesn’t stop there. Jack’s nutrition line, Ripper Nutrition, is launching a nutrition bar that will directly benefit the refugee children. For every bar sold, a shake will be provided for the kids in the camp that will be packed with micro and macro nutrients, vitamins and minerals. Studies show that three out of five children in refugee camps are severely malnourished.

“With the innovation of the nutrition bar in exchange for a child’s meal, Ripper Nutrition is truly becoming a nutrition company with a purpose,” said Amer Abdallah, Jack’s business manager and co-founder of Ripper Nutrition. “Badou’s dedication to these children in need is incredible and we plan to support it through his various endeavors in the U.S., Middle East and Asia. The sky is the limit.”

Badou Jack “The Ripper” is a two-time, two-division boxing world champion who has held the WBC Super Middleweight and WBA Light Heavyweight world titles. Born in Sweden, he represented his Father’s native Gambia in the 2008 Olympics before turning pro in 2009. Jack is promoted by boxing legend Floyd Mayweather’s Mayweather Promotions and lives and trains in Las Vegas, Nevada.

Outside of the ring, Jack has prepared for life after boxing through strong business investments, while also giving back and establishing himself as a philanthropist all over the world. Jack owns and operates the Ripper Nutrition supplement, which already boasts a multi-million-dollar Asian distribution deal, and the recently-announced Badou Jack Promotions. His Badou Jack Foundation is dedicated to helping children all over the world, including providing resources for refugee children in Jordan.