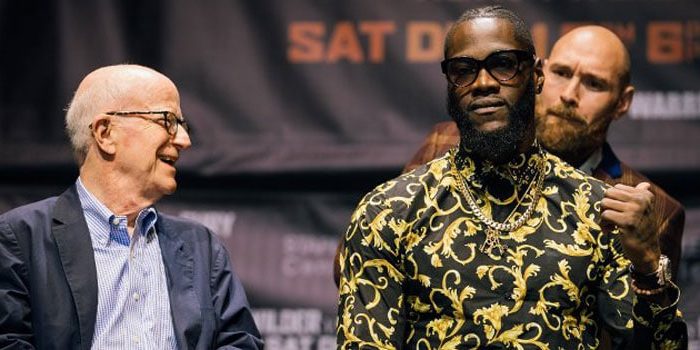 Deontay Wilder took a swipe at Tyson Fury after the Brit postponed a rematch with the WBC heavyweight champion.

The WBC on Tuesday confirmed that Fury has informed the organisation that Wilder will not be his next opponent.

Wilder and Fury were ordered to do battle again after their controversial draw in Los Angeles last December, but a second fight is on hold.

Former IBF, WBA, IBO and WBO champion Fury last week aimed a tweet in the direction of Wilder stating: “I will fight anyone in world boxing, don’t use boxing politics as an excuse not to challenge me the lineal heavyweight champ.”

The American responded with some verbal sparring after the WBC announced that the rematch is off – for the time being at least.

“You sorry m***********. We knew you only said this because] you knew you wasn’t fighting me next. #CloutChaser you requested a warm-up fight first,” Wilder tweeted.

“I don’t blame you though, I probably would too if I saw my brains splashed all over the canvas.”

Wilder’s co-manager, Shelly Finkel, says they were ready to face Fury next – but the Gypsy King had other ideas for the future.

“It’s obvious that Fury doesn’t want to fight us next,” Finkel said to ESPN. “Hopefully, we will get the next fight after that. So, in the meantime, we will do our own fight. We wanted to fight Fury next. We had no interest in another fight first. The proposal Top Rank sent was for a fight first and there’s no reason we can’t do our own fight if we’re not fighting Fury next.

“Everything that we heard from Tyson Fury was that he wanted to fight Deontay next and we were willing to do that. Fury wasn’t.”