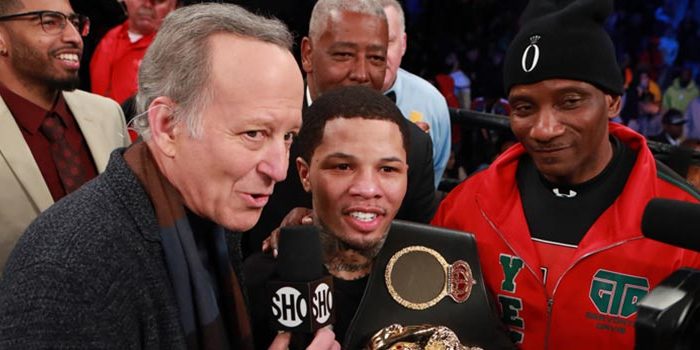 Baltimore’s Davis (21-0, 20 KOs) recorded his eighth career first-round knockout as referee Jack Reiss called off the fight with one second remaining in the first round following a devastating sweeping right hook by Davis connected cleanly and sent Ruiz (39-5, 32 KOs) down to his knees.

Davis, who entered the ring to Michael Jackson’s “Thriller”, wasted little time showing why he is one of boxing rising super stars with his impressive fourth win in a world title fight. The 24-year-old Davis is the youngest U.S.-born world titlist in boxing and was headlining for the first time.

With his promoter Floyd Mayweather looking on, Davis made quick work of his late-replacement opponent. “I knew it was coming,” he said. “I wanted to go more rounds, but I knew if I got him out of there early I could fight again sooner.  When I touched the jab I saw his arm was in front of his face so if I threw a hook or uppercut it was right in line.”

Davis, who has now stopped his last 12 opponents, connected on 50 percent of his power punches, just under the 51 percent power accuracy he logged in his last four fights.

The late substitute 32-year-old Ruiz was fighting for the second time in three weeks as he replaced the injured Abner Mares. Ruiz was used to being on the other side of first-round knockouts having recorded 18 of his own during his career.

“As soon as he started landing punches, I could feel them,” Ruiz said. “I have a lot of first round knock outs, today was my turn to lose in the first round. It happens in boxing.”

Next up for Davis could be the winner of the March 2 Ricardo Nunez-Edner Cherry WBA Eliminator on SHOWTIME from Barclays Center. “We could do that,” Davis said. “At the end of the day I’m a fighter. I’m a fighter and I have a great team. One of the best in the sport. I believe in my team and whatever they line up, I’m ready.

In the co-feature, Mario Barrios (23-0, 14 KOs) knocked out his seventh consecutive opponent as the 23-year-old from San Antonio stopped Mexico’s Richard Zamora (15-3, 10 KOs). The stoppage came at 2:16 in round four as referee Ray Corona waved off the fight after a barrage of Barrios punches landed cleanly and dazed the game Zamora.

Mario Barrios gets the stoppage victory in the co-main event.

With noted trained Virgil Hunter in his corner, the accurate Barrios landed a staggering 59 percent of his power punches, including 37 of 58 (64 percent) in the fourth and final round.

“He wasn’t an easy target at all,” said Barrios, who sparred with Amir Khan and Devin Haney in training camp and is the WBA’s No. 1 ranked fighter at 140 pounds. We just used everything we worked on in camp to find my range.”

He added: “It was an amazing fight. I tip my hat to Zamora – he’s a hell of a warrior. I wish him nothing but the best for the rest of his career. Like he said at the press conference, he wanted a war and I brought it to him. Total respect to him.”

Zamora was making his United States debut. “I came to fight,” he said. “I didn’t come to lay down. I thought I still could have fought more. I don’t want to criticize the referee. He did what he had to do.”

Barrios said he’s ready for the next big step-up in his career. “That’s up to my managerial team,” he said. “Whenever they feel I’m ready I’ll fight for a world title. Any one of them. I am knocking down the door for a world title right now.”

The southpaw Fortuna, of Braintree, Mass, by way of the Dominican Republic, knocked down Bogere in the sixth round, the same round Bogere suffered a nasty cut above his right eye after an accidental head clash.

The knockdown occurred after a powerful left uppercut by Fortuna dazed Bogere, who appeared to be pushed down and touched his glove on the canvas.  Referee Edward Collantes scored it a knockdown, giving Fortuna the 10-8 round.

“(The knock down) was correct,” said Fortuna, who said he would love a future shot against Davis. “I saw his eyes were a little glossy and his legs buckled a bit. When I saw that he was cut, the game plan changed again and we had to work again to attack the cut.”

Originally from Uganda but now living in Las Vegas, Bogere gave himself a seven out of 10 grade. “I think I won the fight,” he said. “Even the knockdown was bull. He kept coming at me with the head. He kept trying to head butt me. The challenge was that there was blood in my eye. The first couple of rounds I was boxing him easily.”

At the midway point of the fight, Fortuna began pulling away winning rounds six, seven and eight on SHOWTIME Steve Farhood’s unofficial scorecard as Bogere continued to fade, although coming back to win round nine on Farhood’s card.

In the power punch category, Fortuna connected on 89 of 310 punches for 29 percent while Bogere landed 59 of 317 for just 19 percent. Bogere was riding a 13-fight winning streak over the past six years coming into the fight.

“What I want right now is a contract so I can fight Gervonta Davis wherever. Lomachenko, any of them,” said Fortuna, who had a No Decision against Adrian Granados last June on SHOWTIME after falling out of the ring in the fourth round suffering a head and neck injury.