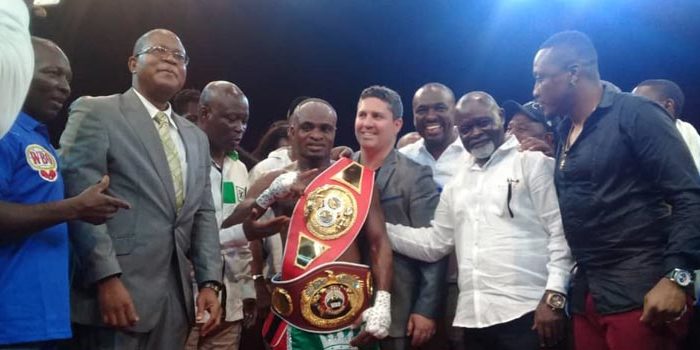 Lomachenko would be quite the step up for Tagoe, now 30-1 (14 KOs). But the Ghanaian lightweight is brimming with confidence following another one-sided performance. Tagoe dominated Gusev, earning an extra point when he scored a knockdown in round four.

The Bukom product controlled the ensuing rounds, landing an assortment of punishing shots on his foe. Gusev, on the other hand, struggled to penetrate Tagoe’s resolute defense.

The decision was a formality. Tagoe annexes both the WBO Global and IBF International lightweight belts. All three judges had Tagoe winning with scores of 120-107, 118-109 and 119-108.

This is expected to be his last fight in Ghana as “Gameboy” plans to relocate to the US under the auspices of new promotional outfit, DiBella Entertainment, with whom he signed a three-year deal with last December.

Tagoe is currently rated fourth by the WBO. He wasted no time at all in calling out the Ukrainian, who is considered by many to be the best fighter in the world, pound for pound.

“Bring on Lomachenko now, I will take him down,” Tagoe declared afterward. “I’m telling you all that I’m the best lightweight in the world and I’m going to America to prove it.

“I respect my brother Richie Commey a lot for winning the world title and making Ghana proud but I’m better than him and I will prove it against Lomachenko that he is running away from.”

“I thank my team and my fans for their endless support throughout the years and I promise to make everyone proud when I go to America. Let’s go Ghana, let’s go for Lomachenko,” Tagoe added.

Samir wasted little time battering Lokkossou in a one-sided first. The big Beninois was game but outgunned. Samir came out for the second like a man possesses, unloading on Lokossou until he crumpled to the canvas. Lokossou managed to beat the count, but a further onslaught felled him again.  He appeared to lose consciousness while on the mat, needing ringside medics to revive him.

The promising Prince Okoe Nartey improved to 11-0 (5 KOs) with a fourth-round TKO over Kofi Johnson in their super middleweight contest scheduled for 6 rounds.

Idris Amadu edged Mawuli Folivi by majority decision, after five rounds of their super middleweight contest scheduled for 8 rounds. An accidental clash of heads drew blood from both fighters, forcing the bout to the cards. One judge had it even at 48-48, while the other two scored it for Folivi, 48-47 and 49-46.

Ezekiel Annan and Sheriff Mohammed settled for a draw –after 8 grueling rounds of super bantamweight action. Cards read 58-58, 56-58 and 58-57.