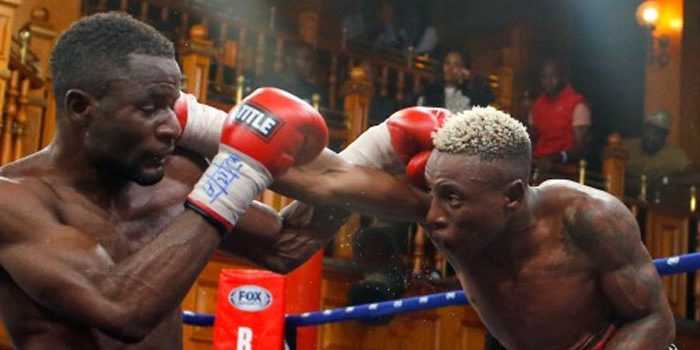 Sebastian lost on a split decision (115-112, 111-116, 110-117) against South African Sibusiso Zingange, who emerged as favourite on the night to become the new WBA Pan-African junior lightweight champion after 12 rounds of intensive action against the nimble-footed Namibian.

The title fight formed part of the mega Fox Sports Africa Boxing 12 Boxing Bonanza at the Sun Carousel in Hammanskraal on the outskirts of Pretoria.

The South African started the better of the two fighters and landed the more telling punches in the opening round as both boxers tried to find their feet.

Round 2 saw Sebastian take the centre of the ring as he pushed forward and applied pressure with some nice combinations. This resulted in the South African holding his opponent and eventually, after numerous warnings, the referee deducted a point from Zingange for the offence.

Round 3 was more of the same as the Namibian chased ‘Mabhere’ around the ring, but the South African looked comfortable on the move and continuously tagged Sebastian with a straight right.

The middle rounds proved extremely difficult to score with neither fighter really taking the upper-hand. Both seemed comfortable to stand and trade blows – ‘Iron Fists’ pushing forward and scoring with punches on the way into the clinch while Zingange scored as he fought his way out of the clinch.

Round 9 and 10 saw the Namibian begin to tire and ‘Mabhere’ took full advantage of this with some solid jabs and right-hooks to the body, which probably saw him win those crucial rounds.

Round 11 saw Natanael find a second win as he pushed the action and started landing some powerful right hands to the chin of the South African, but Zingange stood-up to the challenge and got through what was a very difficult round for him.

Round 12 saw ‘Mabhere’ hit and move, throwing a sneaky leading right before shifting positions. This proved to be a successful tactic for the South African in the final round, as he won the fight by split decision. The victory is Zingange’s 13th of his career (W13-D2-L3) while for Sebastian it is the fourth loss and leaves his fight record at W10-D0-L4.