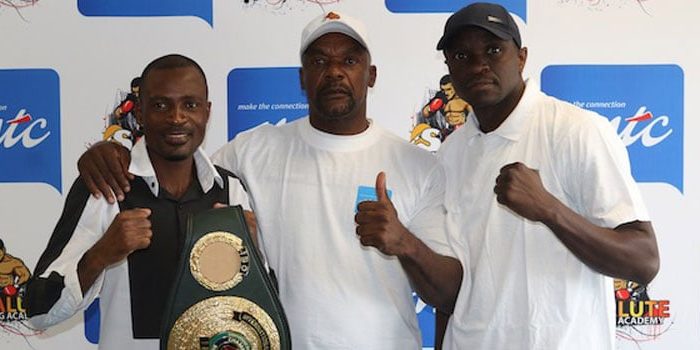 MTC Salute Boxing Academy will stage their first bonanza of 2019 at Rundu at the end of March, while one of their stable contenders, Sebastian Nathaniel will challenge for an international title next week.

Nathaniel is one of SBA’s top prospects, but will face a tough opponent in Zingange who has a record of 12 wins and three defeats, while he also won the African Boxing Union super featherweight title in his last fight in May 2018 when he beat compatriot Prince Ndlovu on points.

One of Zingange’s defeats, however, came against Namibia’s current WBO Africa super featherweight champion, Jeremiah Nakathila on a sixth round technical knockout at the Windhoek Country Club at the end of 2017.

Shivute also announced that the MTC SBA’s first boxing bonanza of the year, entitled, ‘the Kavango River Fray’ will be held at Rundu on 30 March.

In the main fight of the evening, Jonas Matheus will defend his IBO International bantamweight title against an opponent yet to be named.

John Ekongo of MTC said the boxer could not be named yet due to ongoing negotiations, but Shivute said he was a ‘tough cookie’ who had fought against top Namibian fighters in Namibia before.

This will be Matheus’ first defence of the title that he won in July last year when he comfortably beat Makazole Tete of South Africa on points. Matheus’ professional record stands at 11 wins, two defeats and one draw.

According to Shivute they have a full programme in store for the Kavango River Fray, which will be the first professional boxing event to be held at Rundu, with junior amateur fights starting from 11h00 in the morning while the professional fights will commence in the evening.

Shivute also congratulated another boxer from their stable, Lukas ‘Destroyer’ Ndafoluma who won the WBF Intercontinental middleweight title in August last year, and then successfully defended the title two weeks ago when he knocked out Rams Ilunga of the DRC in the second round.

Shivute thanked MTC for their recent sponsorship of the Salut Boxing Academy which was announced in December 2018 and amounts to N$4,9 million over three years.

“The partnership could not have come at a better time, since we are now finally able to realise our dreams of empowering fellow Namibians. It will now be viable to take boxing to all corners of the country and more young people will have the opportunity of pursuing a boxing career,” he said.

MTC’s Ekongo, meanwhile, said other boxing academies should not be discouraged if their appeals for sponsorship are unsuccessful.

“Our social investment projects depend on a lot of variables, like what is your plan and vision, and how does it align. It’s like a job application and if you are not approved don’t be discouraged, just try harder next time,” he said.