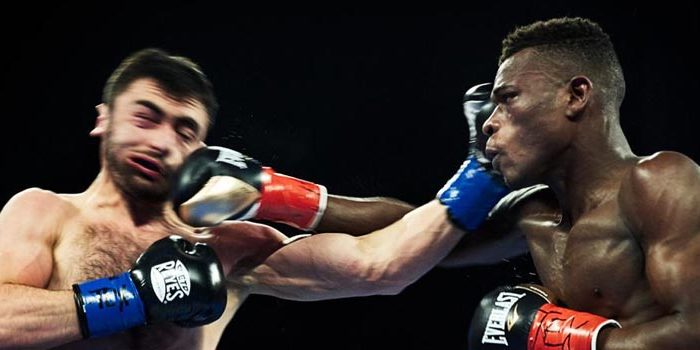 Newly crowned IBF world lightweight champion Richard “RC” Commey has the boxing world in the palm of his hands–assuming those hands are healthy.

In doing so, Commey became Ghana’s ninth world champion. The town of Bukom, where Commey hails from, has more world champions per capita than any other area on the face of the Earth.

While a spring date versus pound-for-pound king and WBA/WBO world lightweight champion Vasyl Lomachenko was initially slated for April 12 at Staples Center in Los Angeles, California, that may now be in jeopardy.

Commey complained of a hurt right hand immediately following the Chaniev bout. A visit to the doctor on Monday revealed he has a floating tendon on his middle finger knuckle of that hand. An MRI later this week should determine if surgery is necessary.

If that occurs, Commey will likely lose the April date versus Lomachenko, who could face mandatory challenger Anthony Crolla instead. Some have suggested Commey take on fellow Ghanaian and DiBella Promotions stablemate Emmanuel “Gameboy” Tagoe in the interim.

But the new champion dismissed such talk during an interview with EIB Network.

“Have you seen two Ghanaians fighting for the same world title?” Commey asked. “No. I wouldn’t even want to fight him. Ghana needs more world titles and so there is no point fighting him for my title. I worked so hard for this and if he really wants this, he should also go through the hard way just as I did.

“I know he is good and thankfully he is also signed to DiBella Entertainment so he can do it,” Commey continued. “Ghanaian boxers are known for winning world titles so I pray he also gets another title for Ghana.”

Commey, who has been showered with praise from boxing authorities in the US and Ghana, as well as from Ghana president Nana Akuffo-Addo, will likely return to his homeland pending the results of the MRI.