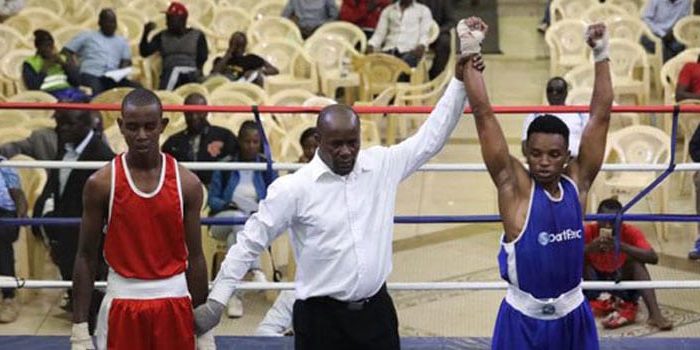 Vihiga, Kilifi, Busia and Nairobi ‘A” put in dominant performance as they each had four boxers in the National Novices Boxing Championships quarterfinals on Wednesday evening at County Hall, Nairobi.

Kwale, Kisumu and Kenya Prisons had three boxers apiece easing through to the quarterfinals alongside Nakuru and Kakamega, who had two pugilists each.

“We are impressed not only by the huge turnout but also the good standards especially from the beginners,” said the bouts supervisor Albert Matitu.

Nelson Musa from Vihiga claimed a split point 2-1 decision victory against Said Juma from Montana to advance to the quarterfinals of the light welterweight.

Vihiga’s Sila Sudi edged out Steve Omondi of Prisons as Kilifi’s Donald Shivatsi beat Benjamin Ashivono from Trans Nzoia to glide through to the quarterfinals of his middleweight contest.

Evans Thoya from Busia and William Kiplagat from Kakamega bundled out Siaya’ s Morfat Ochieng and Ken Otieno of Nairobi “B” 2-1 respectively to advance in middleweight.