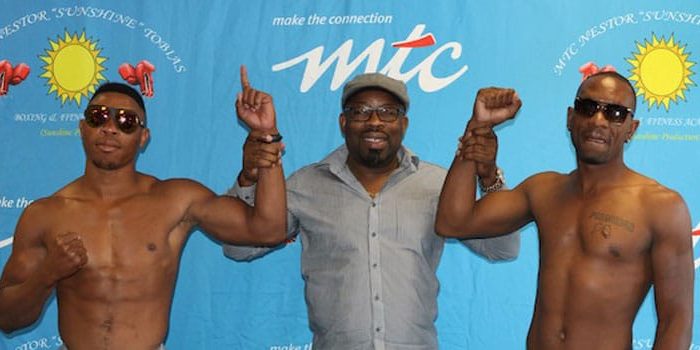 CHARLES Shinima will take on Mendu Kaangundue for the national junior middleweight title in the main fight of the ‘Back to the Roots’ boxing bonanza to be staged at A Shipena Secondary School in Katutura on March 2.

This was announced by promoter Nestor Tobias of the MTC Nestor Sunshine Academy at a press conference on Wednesday where the two protagonists came face to face for the first time.

Shinima, who is still unbeaten after seven fights said he was ready to grab his opportunity.

“I want to thank my promoter for this opportunity to fight for the national title. I’m ready, I’m on my way up and no one will stop me. Beating Mendu is part of the plan because he’s standing in the way of my goal – I’ve prepared very well and I’m going to win the fight,” he boasted confidently.

This will be the first time that Shinima will feature in the main event and he said this was just the start.

“This is my first time in the main event, but there will be a lot more in future. I don’t have a very good amateur record, but that won’t stop me from becoming a world champion,” he said.

Kaangundue, who arrived more than 30 minutes late for the press conference, called Shinima his ‘small boy’.

“I know Charles well – he’s my small boy in the gym and I have been sparring with him for a long time. He’s confident of giving a good performance, but I’ll lecture him in the ring,” he said.

Kaangundue, however, doesn’t have a great record, with six wins and three defeats, while his last two fights ended in defeats against Lukas Ndafoluma and Emmanuel Mungandjela.

A jam-packed evening of boxing will be in store with ten other fights on the undercard.

In the main supporting bout Harry Simon Junior will take on Dominicus Weyulu in a junior welterweight fight over four rounds.

Simon Junior, who is still unbeaten after seven fights, will start as the favourite against Weyulu who has only won one of his six professional fights, while losing four and drawing one.

Weyulu, however, was not perturbed saying that Simon was riding on the popularity of his father, Namibia’s former world champion Harry Simon.

“Harry Simon Junior has got a name, mainly due to his father who is a former world champion. But he needs to build up his own name, because I’m not fighting his father,” he said.

Simon said he was expecting a quick victory.

There will be a further nine fights on the undercard consisting of up-and-coming Namibian fighters.

According to Tobias the bonanza was named Back to the Roots, because their first professional fight was staged at A Shipena School while a lot of Namibia’s champions performed their in their youth.

Some of the other up-and-coming boxers who will be in action include Fillipus Nghitumbwa (five wins from six fights) and Gabriel Jamba (three wins from three), while several other boxers will be making their professional debuts.

The tickets cost N$50 for general seats and N$200 for VIP seats and are available at the MTC Nestor Sunshine Academy office and at the Namibian Boxing Control Board.