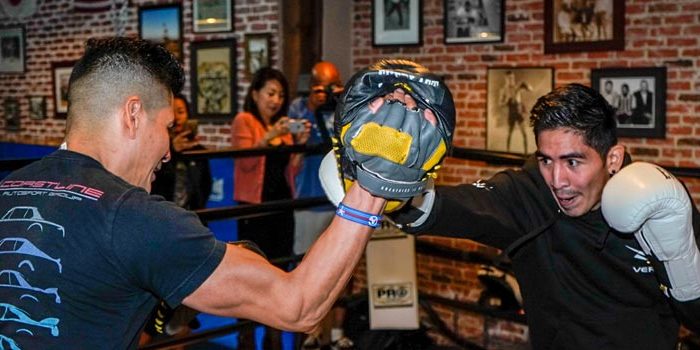 Santa Cruz, who was joined by his father and trainer Jose Santa Cruz, showed off the skills that have made him a can’t-miss attraction. Santa Cruz was originally scheduled to face Miguel Flores, but he was replaced by Rivera after Flores suffered an injury in training.

Here is what the workout participants had to say Tuesday in Hollywood:

“We kept our training camp going despite the change of opponent. We always train the same no matter who the opponent is.

“I’m always staying in shape whether I’m in the gym training for a fight or not. When they call us and tell us what the fight is, we’re always ready.

“I know that Rivera has fought some good opponents like Joseph Diaz and Joet Gonzalez, and he’s gone the distance with them. He’s given them tough battles. He’s shown that he’s a tough fighter who will leave everything in the ring.

“This isn’t going to be an easy fight. Rivera is tougher than people have given him credit for in the past. It motivates me to try to be the first to knock him out. If I have the opportunity for it, I’m going for it. Most important though, is to come out of there with the victory.

“Sometimes when my dad is having tough days dealing with the cancer, I want to stay at home with him, but he tells me to go to the gym and train hard. So I tell him that we’re going to work hard for him. We both motivate each other.

“(WBC Featherweight Champion) Gary Russell Jr. is the fight that I want. He beat me in the amateurs, but in the pros I get 12 rounds. I think that I can beat him.”

“We didn’t worry too much about the opponent change. I don’t think it makes too much of a difference. Leo is going to be at his best and ready for whoever steps into that ring.

“We didn’t let the change effect our routine. We continued the same preparations as always so Leo is ready to fight. We respect every opponent too much to ever fall behind in conditioning.

“I think this is going to be a good fight. Leo is always very competitive and any time he can win a fight he knows it will be big for his career.

“Leo is 30-years-old right now and I think that he will be retired by 35. He has a lot left to accomplish in this sport and our team is going to keep pushing him to be the best that he can.”

“Top to bottom this is just a great card. It’s going to be toe-to-toe action downtown at L.A. Live. It’s an affordable ticket at $30, and that gives you the chance to see one of the stars of the sport in a slugfest.

“Leo Santa Cruz always brings great action and drama when he enters the ring. You have to be on the edge of your seat during a Leo Santa Cruz fight and I expect nothing less next Saturday night. Rafael Rivera has nothing to lose in this fight, and that is the recipe for a tremendous showdown.

“Boxing at Microsoft Theater has caught on. That fight in January between Caleb Plant and Jose Uzcategui had a great atmosphere and it is just a beautiful place to watch the fights. Microsoft Theater is becoming the indoor ‘war grounds’ of boxing.”

“Rafael Rivera put up a great fight against Joseph Diaz Jr., and he came back against Joet Gonzalez and lost a split-decision, but he really won that fight. Rivera should only have one loss on his record.

“Rivera is going into this fight with the same granite chin that he showed everyone against Diaz. He was prepared and ready when the call came for this fight. He’s a great replacement. Leo better be ready and not take him lightly.”