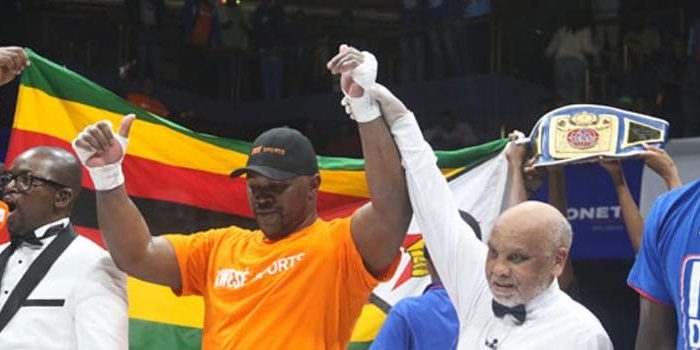 ZIMBABWE’S World Boxing Federation (WBF) Africa champion Elvis Moyo will be hoping for a winning return to the boxing ring when he takes on South African heavyweight champion Ruan Visser in a 10-round international non-title fight at Time Square in Pretoria this Saturday.

Moyo, who is affectionately known as “The Bulawayo Bomber” in boxing circles, has been inactive since his impressive first round knockout victory over Ukrainian Pedyura Maksym in April last year.

Prior to the win over Maksyn, Moyo had defended his WBF title against Congolese Knife Didier at the City Sports Centre in Harare in January 2018.

The Zimbabwean boxer said he was ready for his comeback to the ring and was aiming for a knockout win against Visser.

“I’ve been training hard for this fight and I’m in good shape. I just want to box after 10 months. I can’t say I’m rusty because I’ve had good sparring sessions which have helped me a lot. My aim is to knock him out to improve my rankings,” said Moyo.

Meanwhile, former South African heavyweight champion Osborne “Big Daddy” Machimana, who has faced both Moyo and Visser and lost on both occasions is tipping his compatriot to emerge victorious on Saturday.

Visser also won the heavyweight title from Machimana. He boasts an impeccable record of 13 knockouts in 14 wins against a single loss.

Machimana said: “It is going to be a tough fight for both boxers and, in fact, this will be a test for Visser, but I pick him to win this fight. He is a better boxer than Elvis and he hits very hard. I have been fortunate to attend his workouts and despite assisting him with sparring I noticed a big change.

“His trainer James Ali Bashir [an American] is doing a great job. Elvis is a type of a guy who waits too long to throw that one big punch, and I don’t see Ruann giving him time and space for that.”

Their bout will top the seven-card programme of 5th Elements Promotions of Janie Hebler.