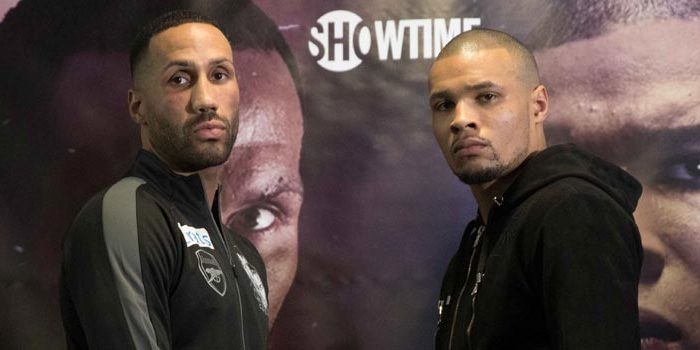 Former two-division world champion, Chris Eubank Sr., was in attendance and not shy about stating this is not going to be an easy fight for his son. “This is a 50/50 fight and for the first time I am petrified of what the outcome can be.  I am petrified that Junior may not win this fight,” he said.

The event is promoted by Poxon Sports and presented by Premier Boxing Champions. Joyce-Stiverne is promoted in association with Ringstar Sports and Don King Productions. The doubleheader will air live in the U.S. exclusively on SHOWTIME and on ITV Box Office in the U.K.

Here’s what the fighters and their respective camps had to say during Thursday’s press conference at Intercontinental at The O2:

“I vacated my title for fights like this.  Chris Eubank has been calling my name for a long time and finally I get a chance to punch him in his face.

“I have no respect for him.  None.  This guy is a diluted idiot.  And on Saturday night I can’t wait to deal with him.  I’m going to come and give it to him properly.  He can’t box.  We’ve all heard this before.

“This is the biggest fight of his career.  It’s retirement time.  Whoever loses this fight is finished.  It’s do or die on Saturday…His retirement fight is here.  It’s his last fight, I promise you that.

“Eubank is a tough fighter, he’s strong.  He has a lot of good attributes, but I’m too good for him.  To mix it up and go to the very top you need more than strength and toughness.  Every time he’s stepped up, he’s lost.

“We are both at a stage where we can’t lose.  We are both fighting for our careers.  He knows he can’t handle me.  He’s asking himself, ‘Can I survive?’  And the answer is absolutely not.

“There’s nothing he can do in that ring that I can’t handle.  I’m going to box his head off.

“What matters is that James’ career is over in a few days.  I sent him a message after he lost to [George] Groves saying he needs to keep up because we are going to fight one day.  And now that we’re finally here I look into his eyes and I don’t see a confident guy.

“It’s my time.  I’m expecting the best he’s ever been and that’s still not going to be enough.

“I’m a world-level fighter.  Anyone in the boxing game knows that.  This is my opportunity to prove that once and for all to set the record straight and prove I’m the real deal.  I know this is a defining fight in my career.  It is do or die and I’m ready for that.

“James knows what’s coming.  At the end of the day, his last performances haven’t been up to par, but i don’t think he respected his [past] opponents.  He respects me, and I respect him and that’s why this is a real fight.

“I’ve been in the game for a long time but this is just the beginning of a long journey for me.  This is my biggest fight.  I have to win.  If I win, I’m back on the world stage.  Beating James DeGale sets me up for a world title which is the whole reason I started in this game.”

“There are levels to boxing.  Chris was a good prospect coming through but he’s not on the same level as James.  He’ll find out what it takes to be a world champion.  James DeGale is levels above Chris Jr.

“Chris may have all the drive he needs but he doesn’t have the skills to beat James DeGale.

“I know James is not losing.  James DeGale is probably the best British fighter I’ve seen in my country.”

“I’ve seen the pinnacle of James and it’s intoxicating. With Chris, not everything I’ve said has been applied.  It may have been heard, but not applied.  What I said works. I wouldn’t have 19 championship wins if it didn’t.

“I’m not convinced [Chris will win] because James DeGale has pedigree.  Being an [Olympic] Gold Medalist and former world champion is real.  I respect the man’s abilities.  Junior hasn’t.

“My son looks at the physical aspect of boxing and, from a physical point of view, I don’t think there is anyone who can stand with him.  But boxing isn’t just physical – it’s also spiritual, and that’s where Junior lacks.  I don’t know whether he has that.

“This is the wisdom of someone who has been here.  You never underestimate your opponent based on past performances.  Anyone who thinks this guy is on a slide because of past performances is making a mistake.

“I do know Chris has learned and let’s see what is produced.  It can be a brilliant fight.”

“I like our chances.  I know the guy that I have been in camp with.  The things I’ve seen, I like. They are much more positive this time around.

“You can’t underestimate a guy like Eubank.  He always comes to win.  But, regardless of the gameplan, there is a certain mentality and my guy has it.  He’s a Gold Medalist and he knows what mentality to bring on Saturday.

“James has won two major world titles, an Olympic Gold Medal.  Chris has had some good wins but when he went to that elite level, he lost.  Chris is a good fighter but he’s not beaten this level of opposition.”