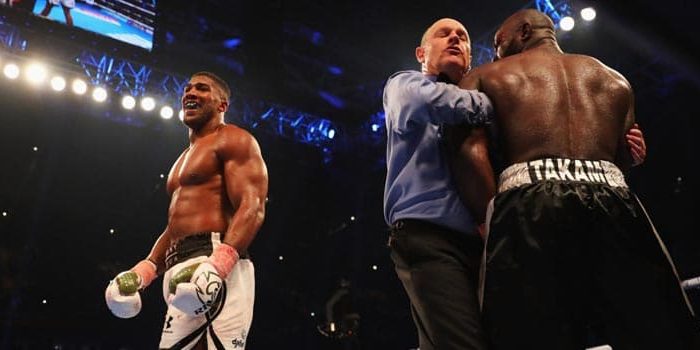 Jarrell Miller has questioned the size and strength of IBF, WBA, WBO heavyweight champion Anthony Joshua. Miller, who himself tested for a banned substance in kickboxing competition, is not convinced that Joshua is an “all-natural” fighter.

He alleges that Joshua, during his rise, was tampering with performance enhancing drugs and is no longer the same fighter.

He explained his suspicions regarding Joshua.

“Nobody could have put on 20-pounds between winning the Olympics and his first pro fight the way Joshua did without taking something. Impossible. We’ve busted our balls to get full testing for 10 weeks to make sure he’s clean before June 1. We’ve covered the bases. If he’s been taking performance-enhancing drugs I couldn’t care less now. I’ve studied him. His physique, his power, his stamina,” Miller said.

“Since he won his titles his body’s slimmed down and he’s only really knocked out opponents who backed away. There’s not the same strength and stamina. Klitschko pushed for testing. In what subjects did Wladimir and Vitali get their PHDs? Sports medicine. Why did people who know everything about physics of the body want Joshua to test every other week? They pushed on that but settled a bit to make the fight.”

Joshua raised his eyes at the comments and responded back.

“I take that as a compliment to all my dedication and strength and power training. If I was on steroids as well I wouldn’t fit in this shirt. He’s talking bull. At the London Olympics I was around 104 kilos and then weighed 107 kilos for my first pro fight the next year. What’s that, just half a stone with pro training? And he’s only talking about one year,” Joshua said.

“What about the 11 years I’ve been boxing since I was 18. I’m now 115 kilos so that’s averaging just one kilo more a year. And that’s down to how hard I work and live. To all the strength and stamina training and weight-lifting. To how I control everything I eat and how I dedicate myself to boxing. It’s my life. It’s pretty much all I do. And it’s expensive, the food and the drink and the lifestyle.

“I’m actually cutting weight now so it would be pretty odd if I was doing anything. By the way, all the anti-drugs programmes I’m signed up to cost plenty, too. I have to let them know where I’m going to be every day. I get random tested roughly twice a week round the year by VADA (Voluntary Anti-Doping Association), I have been on that since 2012 and I pay £40,000-a-fight to be tested by VADA two times a week. And nothing. If ever there was something wrong in my next 10 years boxing it would be an accident. I don’t do anything.”