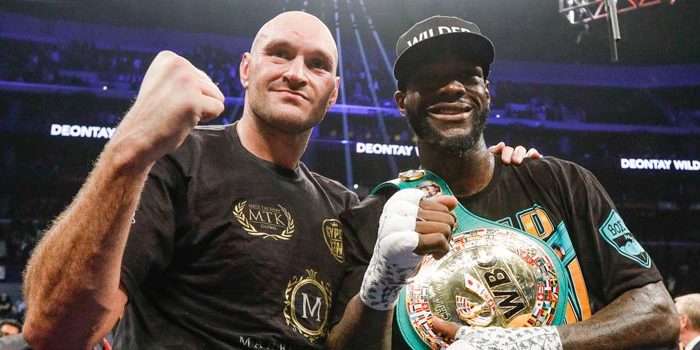 WBC heavyweight champion Deontay Wilder believes that his highly anticipated rematch with Tyson Fury will be announced in the next two weeks.

Last month, Wilder fought Fury to a controversial twelve round split draw at the Staples Center in Los Angeles, California.

Going into the fight, most insiders expected Fury to get knocked out in the first half of the contest.

But that didn’t happen, after Fury’s awkward style and movements troubled Wilder for much of the contest. Fury was knocked down in the ninth round. And then he was nearly knocked out cold in the twelfth, but he miraculously managed to beat the count and fought Wilder in toe to toe fashion until the final bell.

The bout was Fury’s third fight of a comeback which began in June 2018. He was inactive from November 2015, when he shocked Wladimir Klitschko, until his comeback date.

Eddie Hearn, the promoter for IBF, IBO, WBA, WBO heavyweight champion Anthony Joshua, is still gunning to get Wilder in the ring with his fighter.

Joshua is slated to return to the ring on April 13, at Wembley Stadium in London. But those plans could easily change to date in May or June, at Madison Square Garden in New York City.

Hearn has been beating the drum, loud and heavy, with talk that Wilder is avoiding a high stakes unification with Joshua.

But those claims by Hearn have been rejected by Wilder.

“Don’t listen to what Eddie [Hearn] says. It will come around. It’s Wilder-Fury, that’s it,” Wilder said.