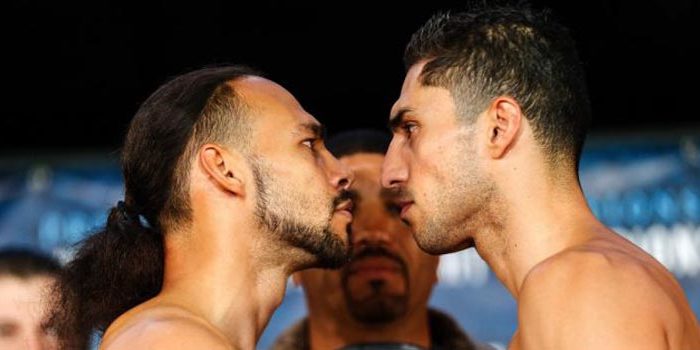 Thurman will fight for the first time since defeating Danny Garcia (34-2, 20 KOs) by split decision in their 12-round welterweight title unification fight 22-plus months ago at Barclays Center. Surgery on his right elbow and a subsequent injury to his left hand were the primary reasons for Thurman’s lengthy layoff.

His hiatus cost Thurman the WBC welterweight title. That championship now belongs to Shawn Porter (29-2-1, 17 KOs), who won it by beating Garcia by unanimous decision September 8 at Barclays Center.

“I saw a ready fighter, man,” Thurman told FOX’s Heidi Androl following the weigh-in. “We’re gonna have a good fight. You know, he looked game. But his eyes aren’t his hands, baby. You know, he’s gonna get hit tomorrow night – believe that!”

“[My confidence is] in the preparation,” Lopez said. “That’s where it comes [from]. I’ve got a great team – Robert Garcia. And I’ve prepared at a championship level and I’m ready to go.”

Before Lopez and Thurman stepped on the NYSAC’s scale, Kownacki came in at 258½ pounds for his 10-round heavyweight fight against Gerald Washington.

The 6-feet-3 Kownacki (18-0, 14 KOs), born in Poland and raised in Brooklyn, was five pounds lighter than when he weighed in for his September 8 fight against Charles Martin. Kownacki, 29, defeated Martin () by unanimous decision in a thoroughly entertaining, 10-round fight at Barclays Center.

Nyambayar, 26, and Marrero, 29, each weighed 125½ pounds. Marrero and Nyambayar, a 2012 Olympic silver medalist, will fight for the vacant IBO world featherweight crown.

“We have three very significant TV fights that, in my opinion, will also be very fan friendly,” said Anthony Catanzaro, the Barclays Center’s senior boxing adviser.