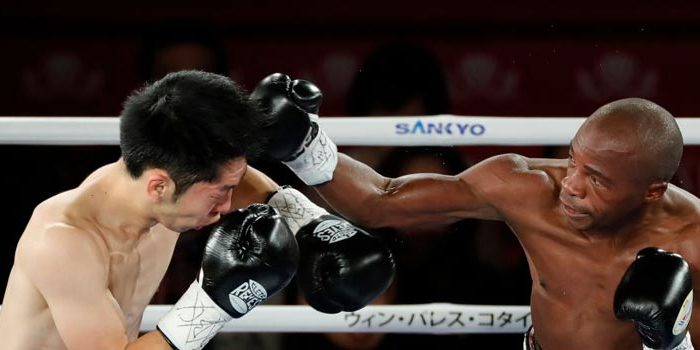 Coming in, Sakamoto had won five fights in a row by knockout – and two of them came in 2018. He lost a twelve round majority decision to Sho Kimura in a WBO regional title fight in November of 2016.

Mthalane came in with a very impressive streak of wins – which began following a TKO defeat at the hands of Nonito Donaire in November of 2008. Since that loss, he’s been riding high. He captured the IBF title with a decision over Julio Cesar Miranda in 2009 and he’s held the title for the last ten years – fighting off top challengers such as Zolani Tete, Johnreil Casimero and earlier this year Muhammad Waseem, who had Mthalane down in round eleven.

Mthalane was very sharp in the contest and was landing very accurate punches on the challenger.

Sakamoto was game and making it a real fight with some very hard combinations getting off during fierce exchanges. In the second half of the fight, Mthalane began to really break down the Japanese fighter. At the end of the ninth round, the referee and the ringside physician took a good look at Sakamoto and allowed the contest to continue.

But he was really given one more round, as he took more punishment in the tenth. When that round concluded and Sakamoto went back to his corner, the referee had seen enough and waved off the fight.

Mthalane now moves forward to what he hopes is a bigger year with bigger challenges, but many of the top names are fighting upstairs at super flyweight.