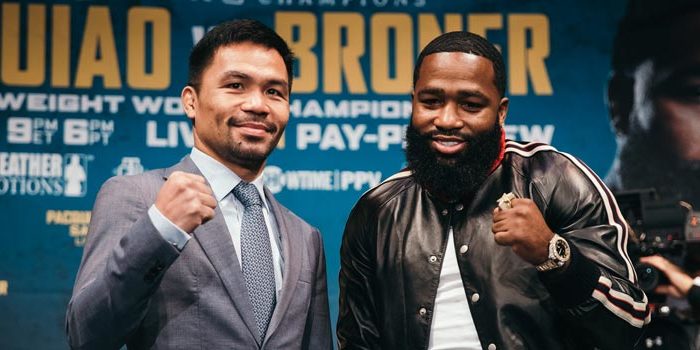 Welterweight Jayar Inson and flyweight Genisis Libranza make their U.S. debuts on the big stage as part of the non-televised undercard headlined their fellow Filipino countryman Manny Pacquiao on Saturday, January 19 at the MGM Grand Garden Arena in Las Vegas.

Inson (18-1, 12 KOs) will battle in an eight-round welterweight match, while Libranza (17-1, 10 KOs) takes on Nicaragua’s Carlos Buitrago (30-4-1, 17 KOs) in an eight-round flyweight match as the two fighters from Davao City, Philippines look to continue their respective win streaks.

In the main event, Pacquiao,boxing’s only eight-division world champion, will end his two-year hiatus from a U.S. boxing ring when he returns to Las Vegas to defend his World Boxing Association Welterweight World Title against former four-division world champion and must-see attraction Adrien “The Problem” Broner on SHOWTIME PPV®.

Tickets for the event, which is promoted by MP Promotions, Mayweather Promotions and TGB Promotions in association with About Billions Promotions, are on sale now and start at $100, not including applicable service charges, and can be purchased on line through AXS.com, charge by phone at 866-740-7711 or in person at any MGM Resorts International box office.

The pay-per-view undercard will see two-division world champion Badou Jack will battle unbeaten top-rated contender Marcus Browne for the WBA Interim Light Heavyweight Title and former world champion Rau’shee Warren taking on France’s Nordine Oubaali for the vacant WBC Bantamweight World Championship in a rematch of their 2012 Olympic matchup that was edged by Oubaali. In the opening bout of the four-fight PPV telecast, unbeaten Jhack Tepora will take on former world champion Hugo Ruiz in a 12-round featherweight clash.