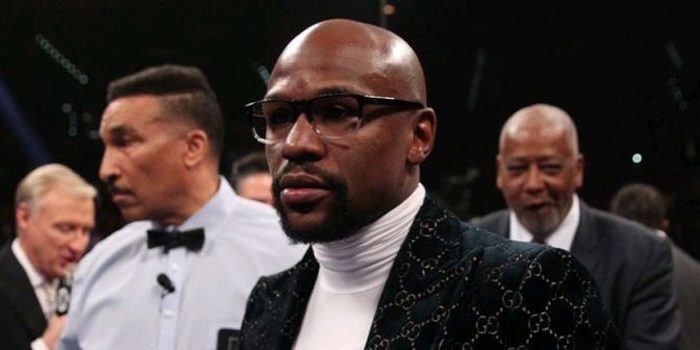 Floyd Mayweather Jr. was noncommittal when asked during Showtime’s telecast Saturday night about a rematch with Manny Pacquiao.

The Pacquiao-Adrien Broner bout was in progress and Mayweather was careful not to disrespect a fighter he has mentored. That interview took place prior to Pacquiao hurting Broner badly during the seventh and ninth rounds, before it became obvious Broner definitely was headed for the fourth defeat of his star-crossed career.

Once Pacquiao-Broner was over, Leonard Ellerbe, CEO of Mayweather Promotions and one of Mayweather’s closest friends, gave a much more definitive answer about Mayweather making another comeback to oppose Pacquiao again.

“No. He’s retired,” Ellerbe said during the post-fight press conference. “He has no interest in doing that.”

When reminded by a reporter that Mayweather could make another enormous sum of money for a rematch with Pacquiao, Ellerbe reminded those in attendance that while Mayweather might seem like he’s always about the money, that’s not necessarily the case at this point in his life.

“Well, it’s not always about the money, believe it or not,” Ellerbe explained. “It’s not always about the money. What more can the man do? You know, he doesn’t have the motivation, the desire. You know, he’s living his best life. Traveling, running his multiple businesses, spending his [hard-earned money], that he spent blood, sweat and tears many, many years [making].”

The same reporter offered another reminder regarding Mayweather’s tendency to get bored when he isn’t actively involved in boxing.

“Well, he’ll be 42 come February 24th and, you know, enough is enough,” Ellerbe said. “You know, what good does it do you to earn all that money, when you can’t stick around and spend it? You know, he’s had a phenomenal career. He’s broke all the records. He has nothing else to prove. I’m very happy for him.”

Skeptics suspect this public exchange essentially was part of initiating negotiations to pay Mayweather (50-0, 27 KOs) as much as possible to end a third retirement.

The undefeated five-division champion is believed to have made more than $250 million for his points victory over the Philippines’ Pacquiao (61-7-2, 39 KOs) in May 2015 at MGM Grand Garden Arena. The most profitable fight in boxing history earned more than $600 million in overall revenue and produced a record 4.6 million pay-per-view buys.

It was a critical calamity, however, because their 12-round bout lacked action and because Pacquiao claimed a pre-existing shoulder injury prohibited him from fighting up to his capabilities.

A Mayweather-Pacquiao rematch won’t net the type of unprecedented proceeds their first fight produced. It is unquestionably, though, the most lucrative event that can be scheduled in boxing, despite that Mayweather and Pacquiao are well past their primes.