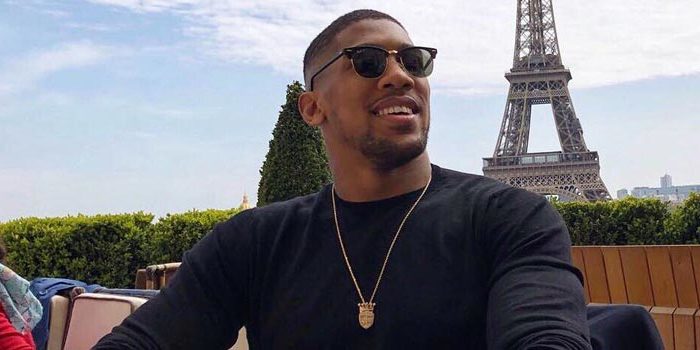 Joshua was in town to watch DAZN stablemate Canelo Alvarez take on super middleweight title-holder Rocky Fielding at Madison Square Garden. He had plenty to say regarding the December 1st showdown between Wilder and lineal heavyweight champion Tyson Fury, a bout which ended in a draw.

Fury stepped in after negotiations between Joshua and Wilder led nowhere. The talks began in April, when Joshua promoter Eddie Hearn of Matchroom Boxing offered Wilder a $12 million flat fee rather than a percentage of the overall purse. When Wilder balked, Joshua went on TV and told the world that if he was offered $50 million by Team Wilder, he would sign to fight him immediately.

Several days later, Team Wilder sent over an offer that included a minimum guarantee of $50 million, plus upside of 50% for any revenue generated above $100 million, for a bout that would take place in the USA sometime between October and December.

Hearn questioned the legitimacy of the offer, which drew the ire of the American contigency. However, Matchroom chairman Barry Hearn, father of Eddie, contradicted his team by announcing that while it was a great offer, they would have turn it down due to Joshua’s willingness to remain in the UK.

Now it appears Joshua is co-signing the comments that the $50 million offer from Team Wilder was, in fact, real. During an interview with IFL TV, the unified champ stated, “It’s the first time I’ve ever had issues on the financial side for a fight. Let’s say for instance tat $50 million we spoke about. Listen, it’s a hell of a lot of money and an honor to even have that number thrown at me. But when you dissected it and what it was, it was kind of like a rights fee–we own you for this amount of money. The issue that I had is that I’ve got long-standing contracts in place and certain partnerships. So you may put that money forward and think you own me 100% but you may only own 50%, so that makes their 50 worth 25%.”

In short, there are a lot of hands in Joshua’s pockets. And he could not commit to taking the legitimate $50 million dollar offer because other allegiances would prevent him from doing so.

Joshua has become more vocal about wanting a Wilder fight since Wilder-Fury, as Wilder predicted. The latter two are now in the driver’s seat and threatening to freeze Joshua out as they are heavy in negotiations for a rematch next April or May.

Meanwhile, Joshua is targeting the Dec. 22 winner between Dillian Whyte and Dereck Chisora. However, BoxingAfrica.com has learned that America’s Jarrell Miller could be Joshua’s next opponent in a bout that, ironically, would take place in the United States.

SHAKUL SAMED AND THE FIGHTING FAMILY TRADITION OF GHANA
June 21, 2021

On June 21, 2003, WBC World Heavyweight Champion Lennox Lewis notched a sixth-round TKO over future champion Vitaly Klitschko, due to a deep, bad cut over Klitschko’s left eye, caused by punches. Klitschko was ahead at the time of the stoppage, although Lewis appeared to be coming on. The great Lewis would retire several months after, at age 38.