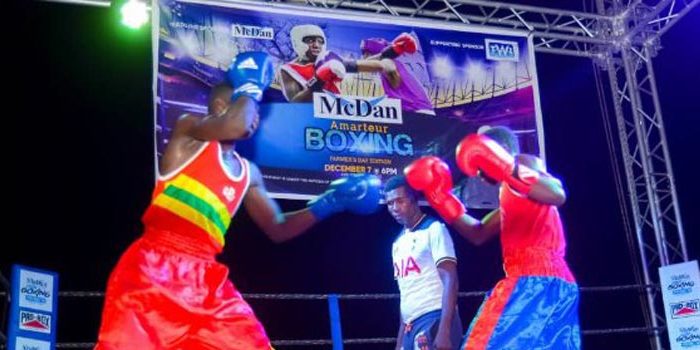 Thrilling bouts and massive entertainment characterized the historic launch of the McDan Amateur Boxing Farmer’s Day edition at the Jubilee Park in Tamale on Friday.

It was initiated by McDan Group CEO Dr Daniel McKorley, who is also the Gub Gbanaa of Tamale (one of the sub chiefs of the Overlord of Tamale).

He pointed out that plans were in place to make it a regular competitive platform to aid the discovery and further development of talents in northern Ghana.

Close to 3,500 people witnessed the successful launch sparking great excitement ahead of the main event on December 7 at the same venue in the Northern Regional capital.

Vice President of the Ghana Boxing Federation (GBF), Abdul Samad Mohammed, who launched the event, indicated that the programme was a much-needed one in northern Ghana saying, “The GBF is glad to facilitate the rollout of this great initiative by McDan. It will give us a realistic idea of the kinds of talents available so they can be further developed.”

He added, “This is a great sign that boxing is reborn in northern Ghana and if we all support the nation will be the eventual winner.”

The McDan Foundation’s lead Mr Gerald Owusu Duku said his outfit’s founder Dr Daniel McKorley who is also a sub chief in Tamale, wants to use his position as a traditional ruler to effect social change.

“We want to make this a regular feature on the sporting calendar so we can make some major discoveries,” he added.

Tamale-based rapper Double T also added to the entertainment package on the night.

The project has received backing from the Ghana Boxing Federation (GBF) as it aligns with efforts of promotion and development of the sport across the country.

The main event on Farmer’s day is expected to attract a mammoth crowd.