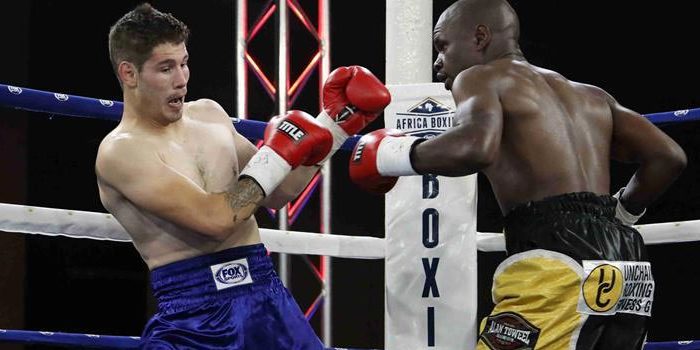 BOXING out of the Lionel Hunter gymnasium, Lebo Mashitoa, displayed a sterling performance to oust his opponent during the Africa Boxing 10 tournament.

Africa Boxing 10, the third successful Africa Boxing event, was held at The Royal Swazi Spa in eSwatini on November 2. The event saw five bouts on the fight bill with Sabelo Ngebinyane taking the honours of the WBA Pan African super flyweight title.

The up-and-coming Mashitoa beat his opponent Limbani Lano on a unanimous points decision in the International cruiserweight division over four rounds. The judges had it 58/56, 58/56, 58/56 in his favour. Lano tried to get control of the ring from Mashitoa, but Mashitoa dominated each round.

HOLD ON: Southerner, Lebo Mashitoa, held onto his unbeaten professional record in the International cruiserweight bout against Limbani Lano from Malawi in the 2018 Fox Africa Boxing 10 at the Swazi Royal Spa Hotel, Ezulwini. Photo:BackpagePix

Mashitoa maintained his unbeaten record. He dominated the proceedings from the opening bell as he controlled the centre of the ring, keeping Lano on the back foot with his effective jabs. As a result, the ‘Machine’ remains undefeated, recording the fourth win of his professional career.

Cecil Maluleke, Pieter de Klerk and Mbuso Rini, made their professional debut. Maluleke fought De Klerk in a fight that ended in a draw. Neither boxer showed enough stamina to produce a clear winner. Sanele Mhlungu took to the ring against Rini, and Rini defeated him on a knockout. Bangile Nyangani defeated Aubrey Masamba. Nyangani recorded his eighth win and lived up to his nickname, stalking his prey like a panther.

The next African Boxing tournament will take place at Sibaya Casino/Lodge in Durban on November 23.