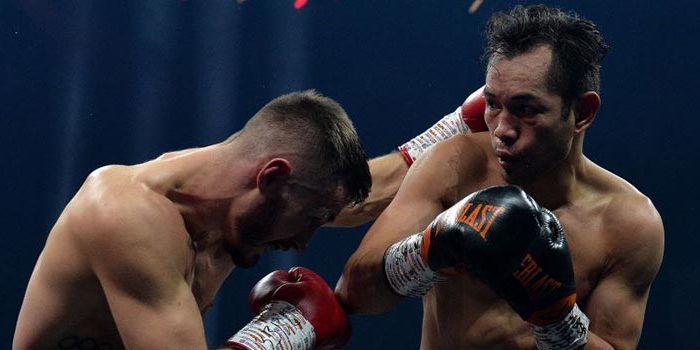 It wasn’t the type of statement Nonito Donaire planned to make, but “The Filipino Flash” is a bantamweight champion again.

Defending WBA “super” world bantamweight champion Ryan Burnett suffered a prohibitive back injury during the fourth round of what had been a competitive 118-pound title bout Saturday night at SSE Hydro in Glasgow, Scotland. Burnett couldn’t answer the bell to start the fifth round and Donaire was declared a technical-knockout winner.

It’s all over! Ryan Burnett retires in the corner after the fourth following a back injury, Nonito Donaire Jr. (@filipinoflash) is the new WBA bantamweight champion! He advances to face WBO bantamweight champ Zolani Tete pic.twitter.com/Y62PgVkCFP

Las Vegas’ Donaire (39-5, 25 KOs) became a champion again in a weight class in which he hadn’t competed in seven years. He also advanced to the semifinals of the World Boxing Super Series’ bantamweight tournament.

The 35-year-old Donaire will battle South Africa’s Zolani Tete (28-3, 21 KOs), who owns the WBO bantamweight championship, in the semifinals on a date and at a site to be determined.

Before Saturday night, Donaire hadn’t boxed at bantamweight in October 2011. The four-division champion defeated Argentina’s Omar Narvaez by unanimous decision in that bout in The Theater at Madison Square Garden in New York.

The native Filipino fought two weight classes higher in his previous bout. That 12-round, unanimous-decision defeat to Northern Ireland’s Carl Frampton (26-1, 15 KOs) was contested at the featherweight limit of 126 pounds April 21 at SSE Arena in Belfast.

Burnett boxed well, particularly in the first three rounds, before suffering that debilitating back injury.

Burnett grabbed for his back and went down with 52 seconds left in the fourth round. The defending champion appeared to hurt his back while throwing a right hand toward a retreating Donaire.

Burnett got up from one knee in plenty of time to beat the count. Donaire pounced on him immediately near a neutral corner and landed a hard right hand.

Burnett survived Donaire’s onslaught and made it to the end of the fourth round.

In his corner, however, trainer Adam Booth and Burnett determined that he couldn’t continue in the scheduled 12-round fight.

In the second half of the third round, Burnett began landing his right hand regularly. An overhand right by Burnett backed Donaire in the ropes with just under 50 seconds to go in that third round.

Toward the end of the third, Donaire trapped Burnett in a neutral corner and connected with three left hands that Burnett took well.