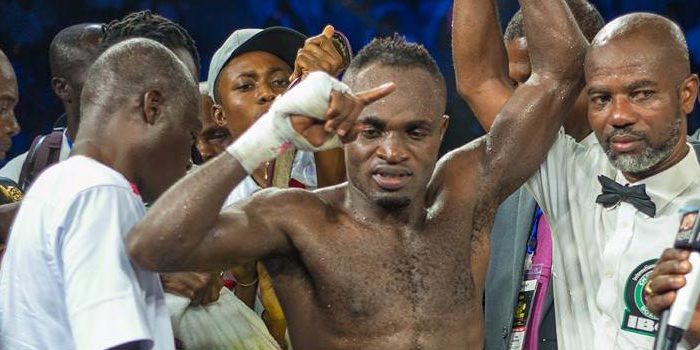 Tagoe comes from a boxing family. His maternal uncle, Nana Yaw Konadu, is a former two-division and three-time world champion, having held the WBC super flyweight title and the WBA bantamweight title twice. Tagoe’s other uncle, the late Emmanuel Teiko Tagoe, was a renowned trainer in Ghana, having worked with Joshua and Emmanuel Clottey, Osumanu Akaba and Ossie Duran.

Despite his boxing background, Tagoe initially had no interest to enter the squared circle himself. However, he was adept with his fists, known locally as a skilled street fighter. His pro debut on June 19, 2004, came about as a fluke. Tagoe attended a boxing event with his uncle Teiko and an opponent for one of the fighters on the card, Lante Addy, didn’t show up. Though he had never trained before nor even laced on a pair of boxing gloves, a confident Tagoe offered to sub in for the missing fighter. He held his own until exhaustion set in and was stopped in the fifth round.

Tagoe was hooked, began to hone his craft and has won 29 fights in a row. The hard-hitting, popular African kicked off 2018 with a 10-round knockout of Fernando Saucedo on January 27 at the legendary Bukom Boxing Arena in Accra. At the same venue, Tagoe boxed beautifully to win a 12-round unanimous decision against former world champion Paulus Moses on October 20. He also has a win against former world champion Mzonke Fana in 2016.

With one exception, Tagoe has fought exclusively in his native country. He did secure a Stateside victory in August 2013, stopping Gerald Robles in nine rounds in Cabazon, CA, and is now determined to make a name for himself in the US.

“I’ve followed Emmanuel closely for a couple years and he’s gotten better with every fight,” said Lou DiBella, President of DiBella Entertainment. “I look forward to working with him toward his pursuit of a world title in the talented lightweight division. DBE is anxious to get started and will be announcing his return to the United States shortly. Accra, Ghana has produced a wealth of great world champions and we believe Emmanuel can be the next one.”

Included among the long list of world champions from Accra, Ghana, are Azumah Nelson, Ike Quartey, Joshua Clottey, Joseph Agbeko and David Kotei. Tagoe is trained by Adama Addy, who guided Agbeko to a world title.

Said the 29-year-old Tagoe, “The grass is greener where you water it. Wherever life plants you, you bloom there with grace. I am in charge of how l feel and today l am choosing happiness because DiBella Entertainment is my everything and they will take me to the promised land which is the world title.”

Peter Kahn, who helped train Tagoe’s uncle Konadu while the fighter was stationed in Florida in the mid-nineties, has taken on the role as Tagoe’s advisor.

“I’m very excited to have Emmanuel Tagoe team up with DiBella Entertainment,” stated Kahn. “DiBella Entertainment is a perfect fit to guide Tagoe toward a world title and with the current landscape of the lightweight division, their stable and their ability to work well with other promoters, Tagoe is going to get his opportunity to fight for a world title. Ghana continues to produce elite level fighters and Tagoe is right in line with the best.”