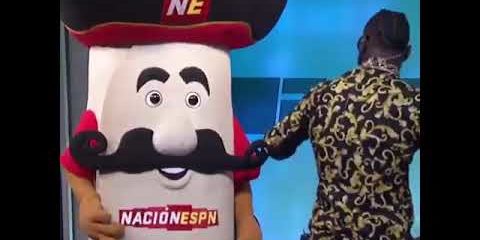 Deontay Wilder has apologiZed if a punch he landed on a mascot on a television show led to an injury to the person inside the costume.

The WBC heavyweight champion floored the mascot, wearing a sombrero and a moustache, with one punch after apparently being invited to show off his power on the Spanish language Nacion ESPN.

Reports circulated that the recipient of the punch had suffered a broken jaw while Wilder denied he was unaware there was anyone in the costume.

A contrite Wilder has offered the mascot tickets to his upcoming bout against Tyson Fury on December 1 in Los Angeles.

He wrote in an Instagram post: “Anything headlining I didn’t know a “Human Being” was in there is just straight “Click Baiting” like come on now, I guess the Mascot rolled out there. show some respect!

“I sincerely apologize to the brave man that was injured (if this is true) I have the up most high respect for him, his participation, willingness and courage.

“If this is true @nacionespn I personally would like to invite him to my Dec.1 fight. Word Is Bond.”

But the network has actually come out and denied the reports of an injury, which may be a hoax that was created by video posters and then pushed by various unsuspecting media members.

“Reports are innacurate. No injury was caused to the Mascot performer during the Nación ESPN segment,” an ESPN representative told TheWrap Sunday.