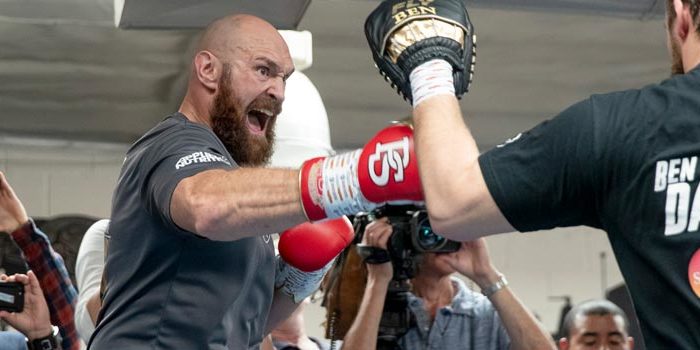 Fury, who is training in Big Bear, arrived nearby by helicopter for the media workout to discuss the showdown with Wilder before jumping into the ring to show off the skills that made him an IBF, WBA and WBO heavyweight champion.

Tickets for the event, which is promoted by BombZquad Enterprises and Queensberry Promotions, in association with DiBella Entertainment and TGB Promotions, are on sale now. Ticket prices start at $75, plus applicable fees and are available via AXS.com. Wilder vs. Fury will be produced and distributed by SHOWTIME PPV.

Fury was working out in shorts from Oddball, a company that donates all of its proceeds to research to fight testicular cancer, a cause Fury has championed. Here is what Fury and his trainer, Ben Davison, had to say Thursday from Churchill Boxing Club in Santa Monica:

“This is an important fight for boxing, because it’s two undefeated champions facing off. There have been people not getting in the ring with top guys for whatever reason, but here you have two fighters stepping up and onto the line.

“It’s a pretty easy fight to analyze, Deontay Wilder needs to connect with that big right hand and knock me out, and I need to not let him do that. I need to do whatever I can to get out the way of that right hand, and make him worry about defending my punches.

“I already became a unified champion; I’ve crossed the bridge into the very upper echelon of the sport. This time I’m back and I’m here for good.

“I’m back to reclaim my throne. Even though I’ve had the tune-up fights, I feel like this is my true comeback fight.

“I’m used to being in hostile, solitary environments for training camp. For the Wladimir Klitschko fight I was in Holland, in a forest 10 miles away from any shop or town. I thrive in the condition in Big Bear.

“There have been no distractions training up in Big Bear. It’s perfect. There’s nothing but a few bears and rattle snakes. That’s it as far as distractions.

“I have a great up-and-coming trainer and he’s going to have me ready for the challenge.

“I wear these funky shorts in public a lot and I wore them today because they represent a company called Oddballs, and every penny spent on these pants goes to research to fight testicular cancer. A friend of mine went through it recently, and I want to spread awareness for him and this cause.”

“I have a great sense of Tyson Fury and can feel what he needs when he wakes up each day and walks into the gym. Our relationship has really gelled these last 12 months.

“I think physically alone you can see how far Tyson Fury has come. That takes a lot of willpower and dedication. He’s put a lot of work in just physically, and that’s really just a slice of what he’s shown in the gym.

“All heavyweights can punch, if any one of them hit you on the chin, you’re going to have problems. It’s not the power of Wilder that we’re focusing on, it’s the agility, speed and awkwardness that he brings. We’re studying his habits and watching every little thing that he does in the ring.

“It takes fights like these to bring the best out of Tyson Fury. He’s a fighter who raises his game to what’s in front of him.”