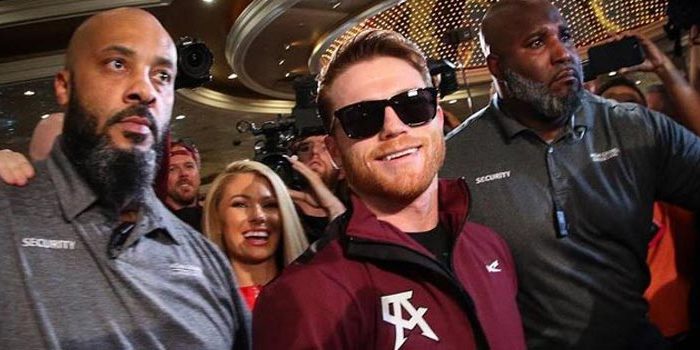 Canelo Alvarez has agreed to make his long-awaited Madison Square Garden debut. The Mexican superstar announced Friday afternoon that he will move up to super middleweight to challenge England’s Rocky Fielding for Fielding’s version of the WBA 168-pound championship December 15 at “The Mecca of Boxing” in New York.

Alvarez has long expressed a desire to fight at Madison Square Garden, but previous attempts to hold one of his fights there haven’t materialized.

Friday’s announcement means the 28-year-old Alvarez (50-1-2, 34 KOs) will make a quick turnaround after a rough 12-round fight against Gennady Golovkin on September 15 at T-Mobile Arena in Las Vegas. Alvarez suffered a deep, long cut over his left eye versus Golovkin, whom Alvarez defeated by majority decision in their middleweight championship rematch.

Alvarez has received clearance from a plastic surgeon to resume training and sparring in time to return December 15.

“I’m very excited to announce my next fight,” Alvarez stated through his Twitter account. “Next December 15th at the New York MSG. Taking a big challenge more in my career and representing the WBC as 160-[pound] champion now I will fight for the world title for the 168 [pounds] vs. Rocky Fielding current WBA champion!”

Alvarez technically has fought at super middleweight once, when he easily defeated Mexican rival Julio Cesar Chavez Jr. by unanimous decision in their 12-rounder 17 months ago at T-Mobile Arena. The maximum contract weight for his victory over Chavez was 164 pounds, four below the super middleweight limit.

England’s Callum Smith (25-1, 18 KOs), the WBA’s true 168-pound champion, dealt Fielding his lone loss when he stopped Fielding in the first round of their November 2015 fight in Liverpool, England. Smith floored Fielding three times before that bout was stopped 2:45 into it.

Alvarez did not announce how his fight will be broadcast. HBO reportedly has an option on Alvarez’s next fight, but the network announced last week that it will move away from broadcasting boxing.

Alvarez has fought once live on HBO and six times in HBO Pay-Per-View main events since signing an exclusive deal with that premium cable network, which began with his third-round knockout of James Kirkland in May 2015.