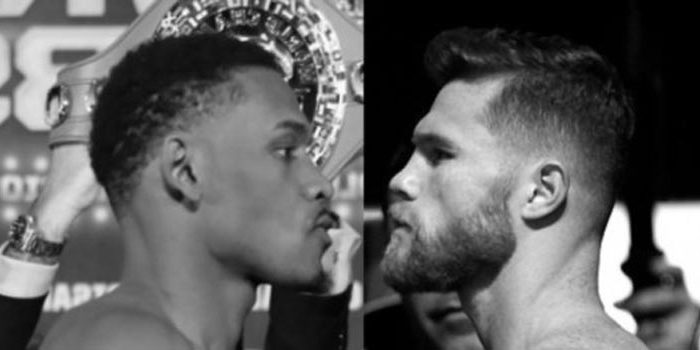 Daniel Jacobs claimed the vacant IBF middleweight title as he traded in his sparring gloves for the real thing on Saturday to take a split-decision victory over Sergiy Derevyanchenko.

The two former training partners have sparred over 300 rounds together early in their careers but Saturday’s clash at Madison Square Garden was the real thing.

Jacobs earned a hard fought split decision victory with two judges scoring it 115-112 and the other having Derevyanchenko the winner at 114-113.

“I felt like I dug deep,” said Jacobs. “I felt like I used my range and tried to use my boxing ability on the outside as much as I can because those are my best attributes.”

Jacobs is hoping this win lands him a shot at WBC, WBA middleweight kingpin Canelo Alvarez.

Jacobs said he has been having trouble getting good fights but now that he has the IBF belt he has more clout.

“We absolutely want Canelo,” he said. “Now I have this strap there will be more in the pudding for everybody.”

Jacobs knocked down Derevyanchenko in the first round with a stinging overhand right. He landed 181 punches compared to 160 for his opponent.

“From sparring him I know he gets a little tired in rounds. Seeing his fights and studying him, I knew that if I let him load up and miss the shots I could come back and hopefully get another knockdown,” Jacobs said.

Derevyanchenko tagged Jacobs with a hook in the second round.

“I saw the light. I saw stars but it didn’t really hurt me. This is as tough as it gets,” Jacobs said.

Jacobs said he is ready to raise his level another notch and fight the best in the middleweight division.

“I feel like I am in my prime,” he said. “I showed true grit and I know I have got another tank inside me if plan A doesn’t work.”