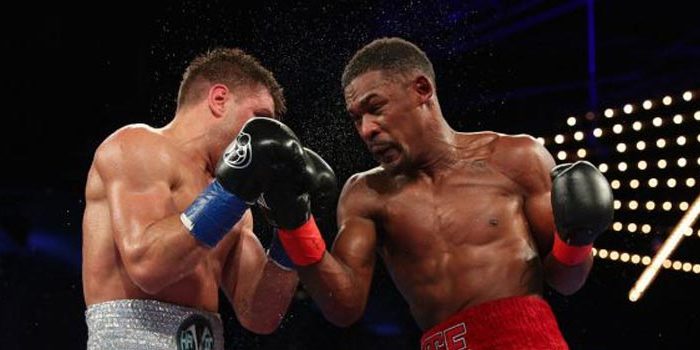 NEW YORK — Middleweights Daniel Jacobs and Sergiy Derevyanchenko could not have been more familiar with each other before their fight on Saturday night.

They have known each other for years – though do not proclaim to be friends — share manager Keith Connolly, trainer Andre Rozier (who stayed with Jacobs) and had sparred more than 300 rounds with each other before they met for a big prize.

That showdown came on before 4,691 at the Hulu Theater at Madison Square Garden and it was as close as the sparring sessions are said to have been as Jacobs won a split decision and a vacant 160-pound world title.

Jacobs had previously held a secondary world title but now he has a major belt and in the deep middleweight division where he is one of the top dogs. But it was not easy against Derevyanchenko, who gave him a fiercely contested battle in which both fighters had their moments.

“He’s a true competitor,” Jacobs said. “I knew exactly what I was getting into when I took this fight. I take my hat off to him. Nothing but respect. I knew it would be hard and I had to dig deep. I used my range and boxed on the back foot. Those are my best attributes.”

The fight, which headlined one of the final boxing cards on HBO, which is dropping its coverage of the sport at the end of the year after 45 years of involvement, came about when Gennady Golovkin was stripped of one of his world title belts for taking the September rematch with Canelo Alvarez rather than face Derevyanchenko, the mandatory challenger.

Jacobs was next in line to fight for the vacant title so when the fight was made, it was clear Rozier, who has been with Jacobs for his entire career and considers him like a son, would train Jacobs. Gary Stark Sr., an assistant to Rozier with Derevyanchenko, who also used to work as a Jacobs assistant trainer, took over as Derevyanchenko’s head trainer.

“Sergiy is one of the most skillful I’ve ever been in with and he’s been avoided for a reason, but I wanted the strap so I had to take it. It’s risk and reward,” Jacobs said.

Said Rozier: “This was what I always expected it to be. Being in the position I was in, both of my athletes made it very awkward but I’m very proud of both of them.”

Jacobs (35-2, 29 KOs) was controlling the first round with his jab when he backed Derevyanchenko near the ropes and landed a right hand on top of the head that forced Derevyanchenko to touch both of his gloves to the canvas for a knockdown late in the round. It was the first time he had been knocked down.

Derevyanchenko stalked Jacobs throughout the second round and got his attention when he forced him back with a left hand that knocked him off balance.

Jacobs, 31, of Brooklyn, New York, taller and longer, used his jab well to keep Derevyanchenko outside while he looked to fire a right hand. Derevyanchenko tried to get inside and slam Jacobs to the body in a fight that was filled with tension.

“He looked gassed after five and I knew I could let him load up and let him miss,” Jacobs said. “He didn’t really hurt me but he’s tough as nails. He worked the body and kind of gassed me but I know I have another level in me above him.”

The sixth round turned into a slugfest as they took turns landing hard shots, both of them going to the head and body until things cooled off mid-round. But Derevyanchenko was on his toes and connected with a pair of right hands later in the round. Jacobs came back with a good left hook in another round that appeared to be very close.

Derevyanchenko (12-1, 10 KOs), 32, a 2008 Ukrainian Olympian now fighting out of Brooklyn, a friend, was on the attack in the ninth round, trying to force Jacobs into the ropes and going hard after his body. But Jacobs responded with belly shots that backed him up. Later in the round, Jacobs landed a right hand that just missed nailing Derevyanchenko on the point of the chin.

There was a lot of back and forth punching in the 10th round as the crowd really got into the fight. But Jacobs, with his steady jab and fancy footwork, got the better of the action.

They slugged some more in the 11th round but it was Jacobs, with his powerful right hand, that did the damage as Derevyanchenko, whose official purse was $462,500 but he will make more, was taking big, deep breaths late in the round.

The pace did not slow in the 12th round as Derevyanchenko looked to land a power right hand, and he came close and roughed Jacobs up a bit in the round but it was too little, too late.

“It was a very close fight,” Derevyanchenko said. “I knew that the knockdown could come back to bite me. But I felt like I was hurting him every round, controlling the action. Maybe I could have jabbed my way in a little bit more and gone to the body a little more.

“It was a great fight. He’s a tremendous competitor and I’d like to fight him again soon.”

According to CompuBox statistics, Jacobs landed 181 of 578 punches (31 percent) and Derevyanchenko connected with 160 of 658 blows (24 percent).

With Jacobs’ contract with HBO expiring with the end of the fight, he likely is headed to new sports streaming service DAZN. His contract with promoter Eddie Hearn of Matchroom Boxing is also up but Hearn has a lucrative, long-term deal with DAZN, which is also now the home of the unified middleweight world champion Alvarez as well as the Hearn-promoted Demetrius Andrade, who won a vacant world title last week.

Even before Jacobs, whose official purse was $1 million (though he earned closer to $1.6 million because of his HBO deal), won on Saturday there was ample talk that Jacobs would be Alvarez’s opponent in May as long as Alvarez defeats Rocky Fielding for a secondary super middleweight belt on Dec. 15 at Madison Square Garden in the first fight of his record-breaking DAZN deal.

“Only time will tell but I really feel like I’m in my prime,” Jacobs said about what might be next. “I showed true grit tonight and I had another tank in me. (As for Alvarez), absolutely. I think that’s the fight the fans want. This would be a great fight for the fans. Let’s make the fight happen.”

There is also Golovkin, who won a close decision over Jacobs in March 2017 and a rematch is a natural. GGG is also now a free agent with HBO leaving boxing but that fight is not necessarily of huge interest to Jacobs at the moment.

“GGG is no longer a champion. I want to go after the champions,” said Jacobs.

That means unfiled and lineal champion Alvarez for what would be a mega fight in one of boxing’s most lucrative divisions.