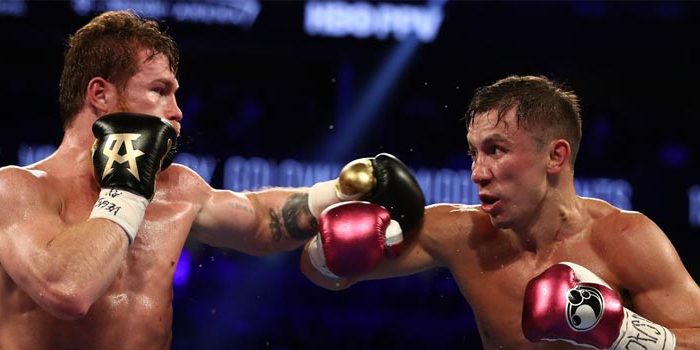 LAS VEGAS – A year and an enormous amount of trash talk later, there still wasn’t much separating Gennady Golovkin and Canelo Alvarez.

The middleweight rivals went back and forth in another very competitive fight Saturday night at T-Mobile Arena. When their action-packed, 12-round rematch ended, Alvarez had exacted his revenge against Golovkin in the main event of HBO’s four-fight pay-per-view broadcast from T-Mobile Arena.

The Mexican icon won a majority decision to deal Kazakhstan’s Golovkin the first defeat of his 12-year professional career.

Judge Glenn Feldman had it even (114-114), but he was overruled by judges Dave Moretti and Steve Weisfeld. Moretti and Weisfeld each scored the fantastic fight 115-113 for Alvarez, who redeemed himself following a performance-enhancing drug scandal that hurt his career earlier this year.

Alvarez hasn’t lost since Floyd Mayweather Jr. defeated him by majority decision in their 12-round, 154-pound title fight five years ago at MGM Grand Garden Arena.

It took everything Alvarez had to avoid losing to Golovkin on Saturday night, when he demonstrated an iron chin and landed hard shots to Golovkin’s head and body.

Golovkin backed up Alvarez with a right hand as soon as the 12th round started. He then hit Alvarez with a flush right uppercut that made the crowd roar.

Alvarez went to the canvas about 50 second into the final round, but referee Benjy Esteves Jr. correctly ruled it a slip.

Alvarez urged Golovkin to come forward in the final minute of the 12th and they traded hard shots right up until the final bell. Golovkin and Alvarez immediately hugged as soon as the fight ended, a sure sign that they again earned each other’s respect.

Alvarez and Golovkin appeared tired at the start of the 11th round. Golovkin hammered him with right hands and left hooks early in the 11th, but Alvarez again showed tremendous resolve and rallied to keep Golovkin at a distance.

Golovkin connected with a straight right hand early in the 10th round, only have Alvarez respond with an overhand right of his own. Golovkin thought he hurt Alvarez later in the 10th, but Alvarez took those hard shots well and fired back to keep Golovkin off him temporarily.

That compelling 10th round featured the best two-way action of the fight to that point.

An aggressive Golovkin went after Alvarez at the start of the ninth round. He had some success early in that round, but Alvarez hit him with a solid straight right hand with about 45 seconds remaining in it.

Alvarez dug to Golovkin’s body early in the eighth round. Alvarez also landed a short right to the side of Golovkin’s head with just under two minutes left in the eighth.

Golovkin and Alvarez traded right hands about a minute later in the eighth.

Alvarez hit Golovkin with a left to his midsection with just under two minutes left in the seventh round. Golovkin snuck in a short right hand with around a minute to go in the seventh as Alvarez charged forward.

Golovkin landed a right uppercut toward the end of the seventh, but Alvarez came right back with a straight right hand that made Golovkin retreat. After the seventh round, Abel Sanchez, Golovkin’s trainer, told him he had to pick up the pace because he was losing the fight to that point.

Alvarez kept trying to land his left hook to Golovkin’s body in the sixth round, but Golovkin continued to block it.

Alvarez landed a hard left hook about 45 seconds into the fourth round. Golovkin went back to using his jab to keep Alvarez from coming forward later in the fourth.

Golovkin connected with a right uppercut about 45 seconds into the second round. Alvarez fired back with a right hand that landed shortly thereafter.

Golovkin came back with a short left hook that landed about a minute later. Alvarez landed a left to Golovkin’s body with just over 30 seconds to go in the second round.

Alvarez and Golovkin began trading jabs as soon as the fight started. Like in their first fight, Golovkin’s jab’s appeared to have more effect in the opening three minutes than those Alvarez threw.

Alvarez and Golovkin fought again one day before the one-year anniversary of their 12-round draw last September 16 at T-Mobile Arena.

Their first fight was very competitive, but the result caused controversy because one judge, Adalaide Byrd, absurdly scored it 118-110 for Alvarez. She gave Alvarez credit for winning 10 rounds, whereas Moretti scored seven rounds for Golovkin (115-113) and Don Trella scored it even, six rounds for each fighter (114-114).

Moretti was the only judge from their first fight that the Nevada State Athletic Commission also assigned to score their rematch.

Their second clash was delayed four months because Alvarez failed two performance-enhancing drug tests in February. Those two positive tests for clenbuterol caused the NSAC to suspend him for six months and forced the cancelation of their May 5 rematch at T-Mobile Arena.

The usually mild-mannered Golovkin has harshly admonished Alvarez for his PED ordeal over the past six months. The constant criticism from Golovkin and his trainer, Abel Sanchez, caused much more ill will between Golovkin and Alvarez than existed prior to their first fight.

An angered Alvarez refused to go face-to-face with Golovkin throughout this promotion until after they weighed in Friday at T-Mobile Arena. Even then, they were quickly separated on stage once their foreheads touched.

With Alvarez suspended, Golovkin instead knocked out late replacement Vanes Martirosyan in the second round May 5 at StubHub Center in Carson, California.

Negotiations resumed for his rematch against Alvarez after Golovkin’s victory over Martirosyan. Their deal wasn’t finalized, though, until Golovkin got a 55-45 purse split that favored Alvarez.

Golovkin, who was ready to walk away from the rematch if his demands weren’t met, accepted a 65-35 split for their first fight.