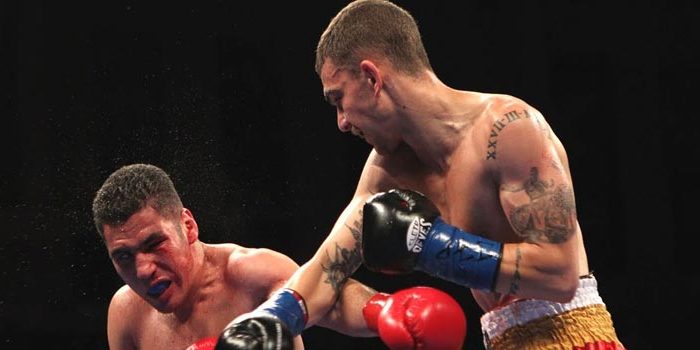 Friday night in Madrid rivals any party scene around the world. Oct. 2, 2015 wasn’t any different, but neophyte promoter Sergio Martinez chose to hit a club show rather than a disco.

Spain isn’t exactly Mexico when it comes to boxing. Martinez wasn’t expecting much when he took a ringside seat at the Palacio de Vistalegre. That’s when he first saw Jon “Jonfer” Fernandez, a 5-11 lightweight with a dizzying work rate and the jaw-dropping wingspan.

That night, Fernandez flattened Ruben Guerrero in one round. Martinez, a former two-division champ and likely future Hall of Famer, knew instantly what he was looking at.

After a strenuous 10-week camp, Fernandez, 23, is itching for fight night. This will be his third appearance and first headliner on ShoBox, Showtime network’s developmental boxing series.

“I’ve worked really hard in training,” he told Sporting News. “I sparred a lot of rounds with Carlos Ramos, who is on the undercard. Petr Petrov is a veteran from Russia — he gave me good work too. And Sergio has been around to watch me train. This fight is very important to me.”

Fernandez never expected to make a living in boxing. Like any other child in Spain, soccer was his passion.

“My uncle was a kickboxer,” he recalls. “He used to go to the gym to workout all the time. I figured maybe a different kind of exercise would help me with soccer. So, I went to the gym with him and started boxing.”

It wasn’t long before Fernandez was beating his uncle there. Soccer soon became an afterthought. After a 75-fight amateur career, Fernandez turned pro in 2015 at age 19. The night Martinez spotted him was his fourth pro fight.

“As soon as I met JonFer, I knew I wanted to work with him,” Sergio says. “His talent stood out right away. I knew he was a hungry, five-star boxer with world championship fever. The perfect prospect.”

Martinez signed Fernandez to a promotional deal. He then reached out to his old promoter, Lou DiBella of DiBella Promotions, to tell him of his latest find.

DiBella isn’t a stranger to talent out of Spain. When Sampson Lewkowicz pitched Martinez to U.S. promoters, DiBella was the only one who recognized his potential and bit.

“Sergio was a freak a nature, a Roy Jones Jr. type,” DiBella says. “Regis Prograis, another one of my fighters, is the same way. They’re guys that do things that really can’t be taught, born with freaky athletic ability.”

He added: “Jon has good size and physical attributes, but what stands out is that he has a tremendously mature, professional style for such a young kid. His ring generalship is outstanding. He’ll get hit a little because he throws so many damn punches. It’s not only how often he throws, but how often he lands. He’s just a superior talent.”

DiBella agreed to co-promote Fernandez with Martinez. In February 2017, “JonFer” scored a third-round TKO of fellow prospect Ernesto Garza in his first appearance on ShoBox.

“I had very good preparation for that fight,” he says. “I was Carl Frampton’s chief sparring partner while he prepared to face Leo Santa Cruz. That experience really helped me improve.”

Fernandez’s improvement is noticeable. In June 2017, he lit up Juan Reyes with a single right in the second.

Reyes, who owns a win over current WBA 122-pound world champion Daniel Roman, had never been stopped before. Neither has Foster, Fernandez’s forthcoming opponent.

“Foster is well-schooled, with a good amateur background,” Fernandez notes. “He throws really good straight punches and can switch lefty and righty. Without a doubt, he has the best skills I’ve faced so far and is the toughest opponent of my career.”

A win over Foster could move Fernandez, who is already ranked number-nine by the WBC, into title contention.

“I could see Jon fighting for that world title within a year,” DiBella says. “We’re going to find out a lot about him on Friday night because O’Shaquie Foster is a good fighter. I want to see how he looks against him first.”

Fernandez says he plans to impress.

“It could be a strategic match for the first four or five rounds. Then, I’ll turn it up. I trained for the full 10, but I’m going for the knockout. I want to put on a good show and open people’s eyes. That’s what got me here.”