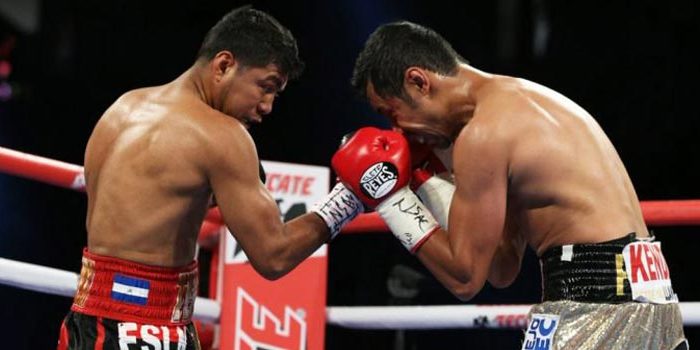 Gonzalez viciously knocked out Moises Fuentes in the fifth round on the Canelo Alvarez-Gennady Golovkin undercard at T-Mobile Arena. The former four-division champion cracked Fuentes with a picture-perfect right hand that knocked Fuentes flat on his back.

Gonzalez hit Fuentes so hard, he went to check on the fallen Fuentes before referee Robert Byrd could even begin his count. Byrd sent Gonzalez to a neutral corner and immediately stopped their scheduled 10-round super flyweight fight at 1:44 of the fifth round.

The Mexican veteran recovered and was able to leave the ring on his feet.

Prior to Saturday night, Nicaragua’s Gonzalez (46-2, 38 KOs) hadn’t fought in the year since Thailand’s Sor Rungvisai knocked him out in the fourth round of their immediate rematch for the WBC 115-pound championship last September 9 in Carson, California. The 30-year-old Fuentes (25-6-1, 14 KOs) slipped 1-4 in his past five fights and has lost three of those bouts by knockout or technical knockout.

Gonzalez was winning the bout before he unloaded an overhand right in the fifth round that took the fight out of a bloodied Fuentes.

Gonzalez pressured Fuentes early in the fourth round, but Fuentes fired back to Gonzalez’s body to temporarily slow him down. Gonzalez landed several left hooks to Fuentes’ body around the midway point of the third round.

Gonzalez began letting his hands go early in the second round and opened a cut around Fuentes’ right eye. About a minute into, Gonzalez snapped back Fuentes’ head with a left hand.

An aggressive Gonzalez continued touching Fuentes with left hooks as blood flowed from Fuentes’ cut later in the second.

Gonzalez and Fuentes were cautious throughout a first round in which neither fighter landed a significant shot.