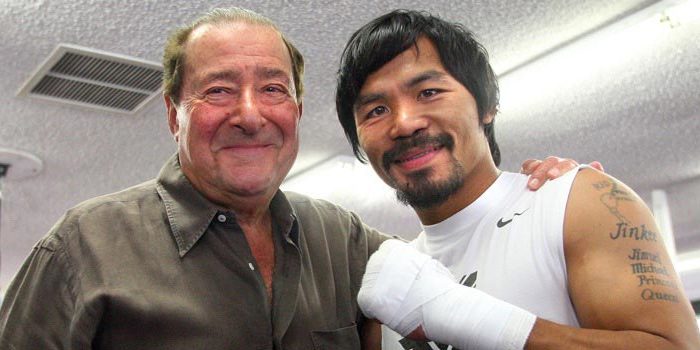 Eight division world champion Manny Pacquiao is working things out with Top Rank, after indicating to sue the promoter for what he claimed was “non-payment and attempt to restrict” his “future rights” as regards his July 15 fight against Lucas Matthysse in Kuala Lumpur, Malaysia.

According to an Instagram post on Monday evening, September 10, Pacquiao said he has not received payment for the US rights to his fight against Matthysse, which was broadcast on the ESPN+ streaming service.

“Therefore,” Pacquiao added, “I am initiating legal proceedings against Top Rank and all other parties based on the non-payment and attempt to restrict my future rights. Thank you.”

But on Wednesday, Pacquiao stepped away from those statements and said there was some miscommunication that was being worked out with the legal team for promoter Bob Arum of Top Rank.

“My post from the other day was a result of miscommunication between my Team and Top Rank. Everything has been clarified. I would like to thank Bob and Top Rank for helping guide my career and for the many great years of working together. We have accomplished so many amazing things together,” Pacquiao stated.

Pacquiao, 39 years old, came back in style after dropping Matthysse in three times for a seventh round knockout.

The Filipino star, who was promoted by Top Rank for over a decade, is now claiming to be a full promotional free agent and recently had a meeting with promoter Eddie Hearn of Matchroom regarding the possibility of fighting Amir Khan on the new DAZN streaming service.